- March 15, 2013
The other morning I needed to grab a few bits from the local Supermarket. Daddy said he'd take me on his way to work and whilst we were walking down the soup aisle he sighed a sigh of longing when his eyes rested upon the Oxtail Soup. Apparently Daddy's favourite soup is Oxtail (I thought it was tomato!) and since being diagnosed as a Coeliac he hasn't been able to find a brand that doesn't have wheat in... although I don't think that he has tried that hard! Being the lovely wife that I am I suggested that I make some for him, he jumped at the chance and so here is my recipe for Oxtail Soup, it did start being based on the BBC Good Food one, but I made a few changes based on a recipe my Nan sent me that she used to make when her family were young.


Heat some oil in a pan (Large pan and you'll need another one in three hours) and season two tablespoons of flour (heavy on the pepper) in a large bowl.

Flour the Oxtail and then gently fry to brown the sides, for me this was six sides (top, bottom and around the four sides) and it took roughly two minutes on each side. Take the Oxtail out to cool on a plate whilst you use the pan again.

Whilst the Oxtail is browning, peel and roughly chop the Carrot, Onion, Leek and Celery. Peel the Turnip, quarter it and then slice into rougly 5mm thick slices. Be careful not to take off a finger or two.

When you take the Oxtail out of the pan, add a little more oil and allow to heat before adding the chopped vegetables.

Add the leftover seasoned flour that you didn't use when you were flouring the Oxtail, the tablespoon of tomato puree and a dash more oil and the Sorelle (of course if you are a drinking non gluten free family you can add red wine here and use ordinary Flour too!) stir well and let the mixture simmer for a few minutes. Season the mixture again with Pepper.

Add the Oxtail back to the pan, including any juices that may be on the plate the meat rested on, making sure you know how many pieces you have added and then add the 1.5L Beef Stock and the Bouquet Garni. Leave the pot to simmer for two and a half to three hours, occasionally coming back to stir and taste because it will smell so delicious that you have to taste it.

Remove the Oxtail pieces (see now you know why you had to remember how many pieces) and place on a plate to cool.

Remove the Bouquet Garni, before straining the soup through a fine strainer into another pan. Use the spoon to mush the vegetables to make sure as much taste as possible gets through, try doing it in batches so you don't throw the mixture into the soup like I did... twice.

Put the vegetables to one side as you don't need them now, but they do make a delicious addition to a casserole or you could blend them to make into a thick vegetable soup if you add a little more stock, but that's another post.

Take the Oxtail pieces and remove the meat from the bones. This is best done with a giant plaster or piece of sticky tape over your mouth so you don't taste any of the pieces, also lock any body in your family out of the house (like my husband) as they will eat far to much if they get too close.

Add the pieces of meat back to the Soup and cover and allow to cool, as you aren't finishing the Soup until tomorrow.

The next day, around thirty minutes before you want to eat, start to heat the soup (which will be like a very thick gravy or possibly gone all rubbery) up very gently before adding the extra 0.5L Beef Stock and some extra salt and pepper (actually just pepper, you probably won't need salt) and giving it all a good stir.

Serve with crusty bread or whatever you have laying around in the kitchen! 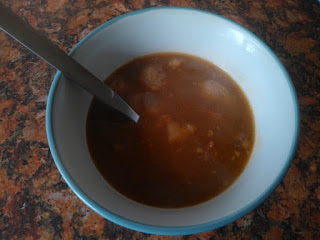 Personally I think that it needed a little more tomato, but as Daddy isn't that keen he wouldn't let me.

This cost approximately £11 to make (ingredients wise), but there were six large servings (maybe really ten), and it's cost per serving is a more reasonable £1.83 (£1.10 if ten servings) and for something that was not only alcohol free but also gluten free we think it's well worth it and when we make it again we could make it with less Oxtail to reduce the price further.