- March 22, 2013
I'm a big Dr Oetker fan, my cupboards are stuffed full of various tubs of cake decorations and sugar sprinkles from the company and when I was asked if I'd like to try some of their new Panebello Deep Bakery Crust range I was intrigued and said YES PLEASE! The pizzas arrived, and I have to say that the packaging looked great and had my mouth watering, but I was ready to be let down because everyone knows that frozen pizza never tastes or looks as great as the picture on the box. It took a few days until we had Pizza scheduled on the meal plan, and when I got the pizzas out of the box I was pleasantly surprised. The pizzas looked good, they were deep pan, there was plenty of toppings and they looked as good as the ones on the box. 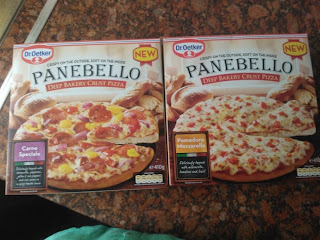 Cooking the pizza is easy, just take it out of the packaging and throw in the already heated oven. You don't need a tray, you can just put them on the oven shelf (although I hate doing that as I always get the pizza stuck to the oven shelf) and other than turning the pizza half way through the cooking time to ensure a more even bake you pretty much ignore the pizza for twenty minutes... although I kind of forgot about that and the pizzas cooked anyway. 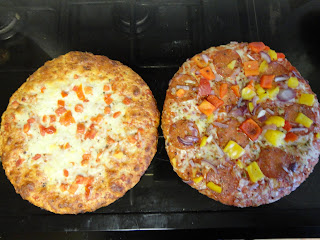 Top Ender, Big Boy and I shared the pizzas for dinner (and I got the leftovers for lunch) last night and there were mixed reviews. Big Boy was pleased at the pizzas, citing that the deep pan crust was crusty on the outside and soft and chewy on the inside and that is his favourite. Top Ender liked that there was plenty of topping (there did seem to be a lot of cheese) but that she is a thin pan fan so there was too much dough for her.

I was comparing the pizzas to the ones that I make for the family, after all Daddy can't eat frozen pizzas other than maybe two gluten free brands and so I have some experience in making pizza. I loved the bases, I love proper deep pan that is thick and soft and chewy, and in my opinion it's the only way to eat a pizza. The sauces didn't seem as flavourful as the ones that I make, but then maybe I'm so used to my own heavily seasoned sauce nothing else compares.

There was a lot of topping and it was flavourful too, the pizzas were nicely balanced between the different flavours and to be honest these were nice frozen pizzas BUT we won't be buying them again. The pizzas were so high in carbs, that it just isn't practical for us with Big Boy's diabetes and trying to keep his carb count balanced. If we didn't have to worry about his diabetes then we'd more than likely choose these instead of a take away pizza.

We were sent two pizzas to review, we had them for dinner and this is honestly what we thought.