News of the Week

- March 20, 2013
I enjoyed catching everyone up with our news last week, that I thought I would do it again this week (and possibly again the week after too!) as there are always little titbits of news that aren't complete enough to be a blog post or are too long for Twitter and Facebook and if you ever want to know more about something that I've mentioned on Twitter or Facebook then you can always ask. I might not give you any more detail, but then again I just might!

On Saturday 9th March, whilst I was driving home from the Supermarket, the car made a rather horrible noise, the sort of horrible noise that can only mean an expensive trip to a mechanic is in order. Luckily the mechanic fixed what was wrong for a rather reasonable price. I wish the same could be said of the cost of the new tyres the car needed, but at least it didn't happen at Christmas eh? The good thing about the car being broken on Saturday evening was that it gave me a lot of time to make the Mussel soup, which was LOVELY! And we got to spend time with my Mum, until my Sister came to pick her up. It's at times like this that I'm very pleased that my family is so close that doing favours like this without asking is just what we do.

Daddy has for months been asking me where I would like a TV in the Kitchen, we've not been able to come up with a suitable area until this week when Daddy realised the perfect place would be just over the sink. It's not that we watch hours of TV that we needed to have a TV in the Kitchen, but it's just nice that we can multi task or spend hours in the kitchen cooking and have some company (other than the radio). Plus with my lasting tinnitus from my recent burst ear drum I really need to have constant noise or the buzzing really does my head in. 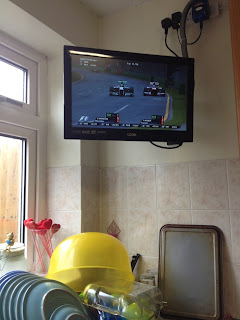 With Big Boy being a diabetic the School are always going to need me to be around on School trips and so I hung out in the Reception Classes on Monday going on a couple of trips to local Travel Agents. Whilst I was hanging around the classroom I spent my time as a Parent Helper and heard a few of the Children read and played with some of the others. This was great because I really enjoyed myself and I was useful. I've asked how I can volunteer some more, although I'm going to need to find out how to get Big Boy to understand that I'm not there just for him to cuddle and be told that I'm loved (although I liked that bit of it).

Top Ender has been having Olive Oil dropped into her ear for the last few weeks, as there was a rather large lump of ear wax that had built up and the Doctor suggested this before the drastic syringing at the hospital option. I had first taken Tops to the Doctors about this when she was two or three, and had been assured that the wax would come out on its own, but had forgotten about it and it was only when Top Ender couldn't hear me that I thought to check again (a good six years later). It finally came out this week, although we were surprised to see that behind the lump of ear wax, was an orange pip! 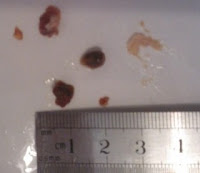 Top Ender had a brilliant parents evening, we love her teacher and have considered kidnapping her to be Top Ender's personal tutor when Top Ender leaves her class next year and we know that the progress that Top Ender is making is due a large amount to how she is taught. Tops is great at Maths and reading, has some great ideas for Literacy and is improving day by day with her handwriting and spelling. I pretty sure that Top Ender is actually me as a child, which is worrying thinking on it! Big Boy's parents evening was postponed as his teacher was off sick, but I'm sure that he has been improving in the last few months too and that we'll get a great report for him too.

I found out that I am a Parent Governor at our local School that both Tops and BB attend. I was really nervous on the day of the vote count, but the number of people I know (and I don't know) who have supported me to get the role is impressive and I'm glad to be able to represent them, and glad that I'm going to be able to help the School too.

So they were the highlights of my week... What happened in yours?
Family Life