- April 16, 2013
I'm not sure how he does it, but Big Boy knows about new games coming out before Daddy and I (I have a sneaky suspicion he has a subscription to a gamers magazine) and has been going on for what seems like months about how we need to get a Wii U so that he can have the new Lego game "Lego City Undercover" as we won't let him have a Nintendo 3DS (it's his birthday soon capiche?!). He even went as far as "building" his own Wii U at School, although I'm not sure the TA knew quite what he was on about.

And then a box arrived.

I had a sneaking suspicion about what was inside and so let the Children open it later that evening and Big Boy was delighted with what he pulled out. Inside the box was a letter from Nintendo, which Big Boy has put on his pinboard (he wants to work for them when he's older). Not only had they sent us a Wii U with a copy of Nintendo Land, but they had sent us a not out in the shops yet Lego City Undercover game for the Wii U, a cupcake (Big Boy demolished it), a hat and eye mask to dress up in, some Lego Stationary and some Lego City Lego.

This meant that the next morning I was woken up by Big Boy asking for permission to go downstairs so that he could play on the Wii U. I was quite sleepy, but sat on the sofa watching Big Boy work his way round the first few tasks in the game and got quite jealous as I wanted a go! Luckily for me Big Boy soon got to a position where he needed some help and so I had a go too. The game is great fun, there are a few jokes that I got as an adult that went over Big Boy's head, and I love that Chase McCain (the main character you play) partner is a bit of a bumbling buffoon as it makes me as the main character look a lot better (I need to learn how to drive a Lego car on the Wii U, I crash far too often and kill far too many Lego City citizens). 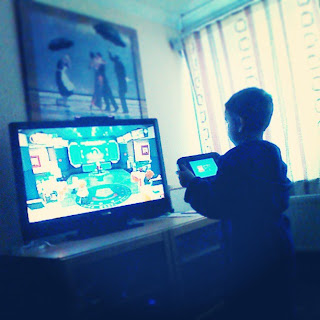 The other great thing is that whilst this game isn't not designed for adults it isn't not designed for children either. It has a sort of universal appeal, meaning that children like Big Boy are able to play the game (and thanks to the helpful tips progress quite quickly) and people like me who are okay at gaming are able to play (and feel superior to the children as we crash less often and get the jokes) and people who are brilliant at gaming can play (and look smugly on as they finish it within a few hours) too.

I've read a few reviews where the game has been slated for not being as advanced as the reviewer thought it should be, but I think it's perfectly designed for families and brilliant to play on the Wii U. Actually, seeing as both the Children aren't around at the minute, I might go and have a quick play of the game now!

We were sent a Wii U and the Lego City game and the other bits I mentioned.