Tuesdays At The Castle

- April 22, 2013
Top Ender is rather like me and loves to curl up with a good book. Occasionally we end up with new books being sent in the post and I'll ask Top Ender to read them. Unlike me Top Ender likes a specific kind of fiction and if something doesn't appear to be in the genre of choice (Fairytale type stories) then she'll huff and puff about it... I had to convince her to give Tuesday at the Castle a go, even though it's fairly obviously slap bang in the middle of her genre of choice! 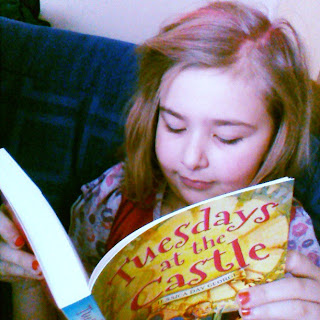 It did take Top Ender a while to get into the story. I'm not sure why, maybe the lure of her Tablet with 100's of books at her finger tips was too great, or maybe as she said, it was because she didn't realise that this was a fairytale type story but eventually she realised that holding a proper book in her hands was a good thing and read and read and read.

And read some more.

In fact she didn't stop reading the book, I swear it went everywhere with us and I even had to say to her that she wasn't to be reading it at Church after seeing it in her bag next to her Scriptures!

The story is about a Princess named Celie whose parents are ambushed by bandits when at their son's graduation and leaves their other son acting as King and Princess Celie having to use her wits and help from the magically room producing Castle to protect her family and the kingdom. So standard Fairy Tale stuff really.

Top Ender loved the book, and has explained the story to me, including a few little plot twists and has actually made me want to read it, which I'll do tonight once she has gone to bed. From what Top Ender has said the story reminds me a little of Hogwarts moving staircases and magically appearing room of requirement, and Howl's Moving Castle (I've not read the book, only seen the Studio Ghibli film) but also doesn't try to replicate the atmosphere of these stories and creates its own magic setting and loveable characters. Tops is really eager for the sequel (Wednesdays in the Tower) and seeing that it will be available in August she hasn't got long to wait.

The book is aimed at adventure lovers aged between 9 and 11, although I think that I might enjoy this book by Jessica Day George just as much as Tops did and I'm way older than 11.

We were sent the copy of the book by Bloomsbury