- April 03, 2013
I've posted before about a family day out to Chessington World of Adventures, which was roughly a year ago, and the children have wanted to go back ever since, but when the new Zufari ride started to be advertised, the children all of us wanted to go back and we got our chance earlier this week, thanks to being asked to attend the launch of the LEGO Chima Challenge.

This blog post is about the Zufari ride though, as people who haven't yet been on it don't know what to expect. Hopefully, I don't give everything away as the excitement of the unknown always makes it more thrilling but enough so that those who want to know if it is suitable for their children can decide.

There are plenty of warnings about who is and who isn't allowed on the ride, all all riders/researchers must be a minimum of 1.1 meters tall to ride and if they are under 1.3 meters they have to have an adult aged 16 or over with them. There can be a long queuing time, when we first went to go on the ride the queue time was 60 minutes, which with bored and cold children just wasn't going to happen. We returned later in the day and were pleased to see the wait time was reduced to thirty minutes, but we only queued for around twenty and when we came out of the ride it was reduced down to 15. Judging from the barriers that are set up, they are ready for wait times of around two hours, but there are a few signs to read about different animals to keep queueing riders entertained, and a green screen where you can pose for a photograph (no obligation to buy view at the end of your ride) and of course there is a soundtrack to the ride which you'll be humming along to after the first five minutes! 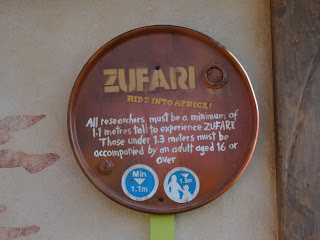 The ride starts off with a video that explains the concept of the ride, Chase Van-Driver (I laughed hard at that) explains that in the part of Africa we are in they have found this lush area that is home to many animals and plant life and they need our help to catalogue it by going on an expedition. We're then warned by a Lemur, the camps mascot of sorts not to go in the cave, as terrible things happen in there and that some people who have entered never came out! Big Boy took this very seriously, as he's been taught by many cartoons, that if a Lemur can talk it deserves to be listened to.

We headed out into our All Terrain Vehicles, where we advised to sit adults on the outside and children on the inside and place all bags under our seats and of course to put our seatbelts on. I was a little troubled by the amount of water on my seat and on the floor, but I knew that it was all a bit of fun and that I'd dry out soon enough if I got too wet. 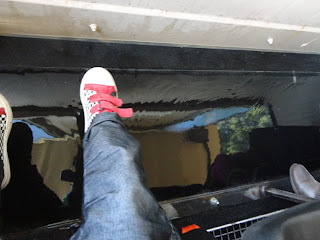 We headed off, with our driver making sure not to go too fast through the huge muddy puddles to see some animals on our Zufari. Unfortunately for us (and some friends who had gone on the ride two days before us) not all of the animals seemed to want to play expedition with us, although we did get to see some quite close.
Whilst we were out on our trip, our route home became blocked and we had to take an uncharted route back to base camp right through the cave we'd been warned about!

Big Boy was really taken in with the uncharted route through the cave, and told Daddy, Top Ender and I several times about how we were told that we weren't allowed to go in there, but that because our route was blocked we had to take the route and how it had been dangerous and wet. Let's just say with the adults sitting on the outside of the open All Terrain Vehicles the children are never in too much danger of being wet, although the adults (especially those last into the vehicle) might find they bear the brunt of it. 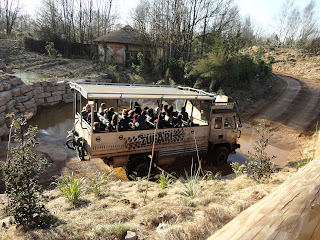 There are a few adjustments/improvements I would make to the ride, (CWOA if you want to know ask me!) but it is a great ride and from the reactions of everyone coming off, worth the queue.

We were given tickets to go into Chessington World of Adventures, after having been to the LEGO Chima event.