- April 21, 2016
I was a little bit worried about getting to Big Boy's bedroom in my KonMari journey through the house. I mean, I knew that my bedroom was TERRIBLE, but it was my bedroom and so I was willing to do the work. I wasn't sure that BB would feel the same way. He hasn't read the book, he doesn't understand why I've gone on this journey and being an almost eight year old he also doesn't know that tidying up can sometimes be...dare I say it? Fun!

Luckily, after having explained the method to BB and him having seen how great it was for Tops and I in our bedrooms he wanted to use the method in his room. I decided that what I would do was help him more than he realised. Rather than letting BB keep everything, I would be a little erm more discerning. McDonald Happy Meal toys? They'd be done. Bits of paper? They'd be gone too.

Yes, I know that this isn't quite the method described in the book, but come on he's nearly eight and it appears he has more "stuff" than a whole bunch of eight year olds put together! 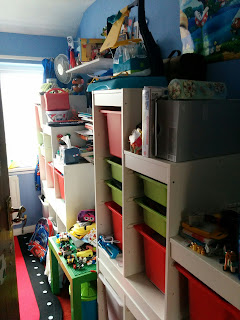 We decided that we'd start early one Saturday morning. BB was very excited about picking things that gave him joy and getting rid of the things that didn't give him joy. He told me that he could envision his bedroom once it was tidy, how he would be able to play in his room, see his favourite belongings and just be able to relax in his bedroom.

Thanks to a crafty tidy up around Christmas time, most of his room was in fairly good order. So as BB sat on his bed, I emptied drawers of toys on to his bed (we'd already done his clothes the previous evening) and he went through them.

He spent just an hour and a half going through the belongings in his bedroom and boy was he ruthless! I didn't need to intervene at all, he got rid of things that he didn't want, didn't need, didn't love and more importantly that he didn't get joy from. He had barely touched some items before discarding them or adding them to the keep pile. Some he did have to think about, and I could see him holding them close to his heart, thinking. He would smile with some, and add them to his keep pile, others he looked nonplussed about as he passed to the get rid of pile. 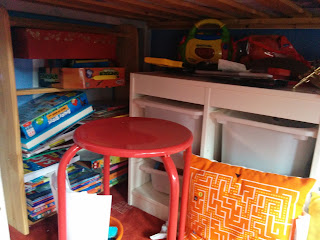 I think that it took BB and I less time than doings BB's room, not because he has less stuff than Top Ender, not even because his things were more organised together in groups of similar items, but because BB gets the sparking joy aspect of the Konmari method.

Once the hard work was done (the actual sorting and deciding on what to keep and what to get rid of) BB was done. He had no desire to organise his things, but then being an almost eight year old boy I think he has better things to do with his time. Like practising getting out of his handcuffs.

I didn't mind however, putting BB's room into an order that would mean he was able to play with his toys, access the things he decided to keep and generally keep it that way in the future was something that I didn't mind helping with.

Once Daddy had made the most of an almost clutter free room to run a few cables in BB's room (I don't know why so don't ask me, it was something to do with a faster connection to the network for BB or something like that) I got to get to work.

It only took me just thirty minutes to  bring his room into order. I called on BB a few times, to check that he was happy where I was putting some key items of his, and each time he agreed that the item placement was good. 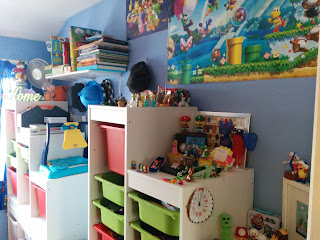 BB has told me that he knows the top of his cabinets looks crowded, but these are the things he wants to keep out to look at. There is a lot, but each item gives him joy and who am I to argue?! 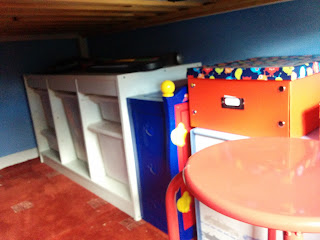 It's only been a few days since we did this to BB's bedroom, but I have to share two benefits we've already noticed.

BB and I were talking about what he might like for his birthday (his friends parents and family members have been asking). He knew exactly what toys he already had and knew that he didn't actually need any more toys, clothes or books but did know that he would quite like some garden toys as he didn't have any. I also knew that he kept all his Tsum Tsum things and so I guessed he'd like some more of those. The point is, even with the gifts that BB will get he'll have places for them to go. He knows what he wants and needs and hopefully we won't get duplicates again.

I hope this is a method that the Children will always apply to their belongings and won't struggle as I have!
Chores Clothes Family Life Making A House A Home Toys