- April 22, 2016
Last term, Big Boy was studying Macbeth at School. I wasn't surprised to find out that he was quite taken with it because he is just like Top Ender and I and we both love Shakespeare. Top Ender, like me finds it rather easy to read the original Shakespearian language and in her English class they are currently playing around with Shakespearian Insults at School, her favourite being "You infectious common-kissing Hugger-Mugger". I'm not actually sure what it means, but hey she's learning Shakespeare right?

Anyway. Bloomsbury Education thought that BB and Top Ender might like to read a Terry Deary book, stories that tell the classic Shakespearian Tales with a little wrap around story too that makes the Shakespeare Play a little more, I don't know approachable? It arrived just in time for the 400th Anniversary of Shakespeare's death (23rd April 2016) too. 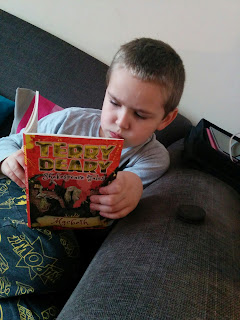 BB loved the story and has a new routine when he gets home from School, rushing through his chores and after School activities (such as practising his spellings, practising his times tables, practising his Violin and getting changed) before sitting down with a snack and allowing him plenty of time to read a few pages every evening before moving on to his next activity.

With BB's birthday just a few weeks away, I'm researching more Terry Deary books that BB might be interested in. However the "Macbeth" and "A Midsummer Night's Dream" books are both available now with an RRP of £4.99 and "Twelfth Night" and "Romeo and Juliet" will be available during June.

We were sent the book to review.
Books Family Life Review