- April 05, 2016
Both Daddy and I love watching live Theatre and it's something which we have managed to pass on to Top Ender. We're working on Big Boy, he has our love of movies but he gets a little distracted and so hasn't really seen much live Theatre, other than the yearly Panto!

For Easter, Daddy and I wanted to get gifts that would mean something, something that would leave us with memories, or would be around for a while to remind us of Easter and remind us of each other and the fun we have together as a family. For Daddy's gift, he got a ticket to go and see War of the Worlds at the Dominion Theatre and enjoyed it so much, that we decided to splash out and take the whole family to see it when we got back from Ireland.

So the First of April, had us travelling into London down to the Dominion. 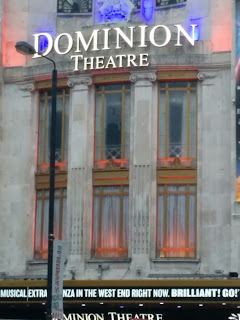 Where we got to sit front row, house left. Close enough that at one point Michael Praed was standing right in front of me and looked me right in the eyes.

He's still quite dishy although it was David Essex I was most looking forward to seeing so I feel a little guilty for saying so! I'm sure however that David Essex and Michael Praed and even Jimmy Nail didn't mind me ogling them, even if the Children did roll their eyes at me over it.

Sitting in the front row, did mean that it was rather loud. It did mean that we felt a little toasted from the Martians Heat Ray and we also got a great view of the Artillery Man's rear end!

I was worried I wasn't going to enjoy the show, mainly because I had read several reviews where the general gist was that this wasn't a Stage Show, but something to listen to. Daddy however had LOVED the show when he saw it prior to Easter and assured me that the reviews had no idea what they were talking about and I kinda trust him more than jaded journalist reviewers.

You know what? The people who reviewed it for the papers were wrong.

The Stage show is AMAZING. 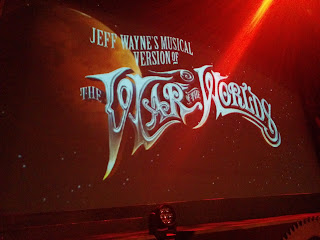 There have been a couple of new songs added, a few new words, parts are expanded and it's sort of been re-imagined so that everyone in the show knows each other and so I imagine all live somewhere around Horsell Common (where the first pod lands) and Maybury Hill. I think this adds a lot to the performance, even if the expressive dance pieces are a little, erm "progressive" for some audience members.

As always Jeff Wayne gives his all to every performance, whilst he conducts the rock and string orchestras, how he can keep his energy up the whole show (for he is on stage the entire performance) is beyond me, but I'm certainly glad for his presence and the funk he and the musicians put into each performance.

I know that this is only in the West End for a limited run.

(I hope it gets extended, even if it has to move Theatre and if you'r reading this Jeff then talk to me I have a couple of ideas that I think you'd like for staging the show, but if you want to catch this you have to get down to London before the end of April (2016)!
Date Night Easter Music Paid Day Out Review Theatre Treat Night