- April 10, 2016
During the Easter holidays, the Children, Daddy and I made a trip to see Zootropolis at the Cinema, thanks to the Disney Store sending us some vouchers to pay for the majority of our ticket price and sending us some cool merchandise too. 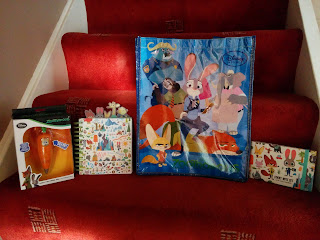 I was very excited, I had seen a clip for the film what seemed like years ago and the comedy in the trailer seemed to be the sort of humour that would amuse both the Children, me and my husband. You know, the sort of comedy that Disney excel at, where some jokes and references go over the Children's head, but other jokes are aimed squarely at them and us adults still get to giggle about them because they are so well crafted.

The Children were of course excited too, they were wearing their brand new Zootropolis T-Shirts and were excited to watch the film... although I think that Big Boy might have been more excited about the popcorn that we had said we'd buy him. 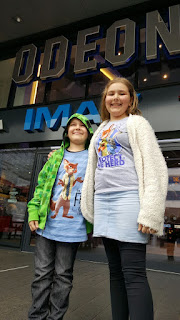 Now, I'm going to try hard not to give you any spoilers in the next three paragraphs, but please be warned that I'm terrible at that keeping spoilers to myself.

The film follows Judy Hopp, a small town bunny who as a child dreams of becoming a a cop in Zootropolis, a city where all animals live together in harmony. Or as we discover in the film a city where there is still distrust between different species of animals.

Judy of course works hard and does become a cop but things aren't as rosy as she hoped they would be, much to the relief of her parents who only want her to be safe.

Judy, feeling disheartened, makes a rash decision which sees her agreeing to giving up her career in the Police Force if she can't solve a Missing Persons case in 48 hours. Realising that she has no resources to fall back on, as she isn't on the system at the Police HQ, and only one lead a wise cracking sly con artist Fox.

Sound familiar? Yeah, well the film is jam packed with film references (We saw references to Frozen, The Godfather, 48 Hours, Speed, Big Hero 6 and several other Disney movies), cultural references (Breaking Bad, Apple products, Google photo app, several popular musical artists to name just a few!) and everyone in the film seems to be checking their phone or playing on their ipod or tablet.

I think our family would fit in quite well in Zootropolis. 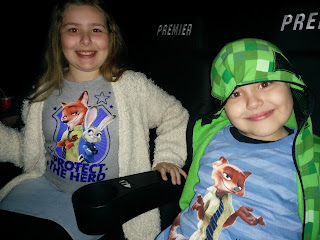 As we left the cinema, the Children, Daddy and I started discussing the film. We all agreed that it was hilarious, I thought it was one of the best Disney movies I've seen for a while and that it was definitely one we'd want to watch again.

We were sent the goodies in the first picture and given some vouchers to pay for the majority of our Cinema tickets.
Film Paid Day Out Review