I KonMaried The Heck Out Of That Room!*

Not too long ago, I picked up a copy of "The Life-Changing Magic of Tidying" by Marie Kondo. A lot of my friends online had said that they had read the book and that it had changed their lives. that they understood now why they were always tidying and had taken steps to stop this.

As far as I could tell from what I had heard on the TV and from these friends the method involves a lot of throwing away. This idea of throwing away both scared and exhilarated me. You see, I'm a hoarder by nature, I remember as a young child putting belongings in a bag in case there was a fire or a situation that meant I needed to get out of my home quickly. This quickly turned into having more than one of several things, and not wanting to let go of older items... a hoarder. Just not so bad that I'd get my own TV show. 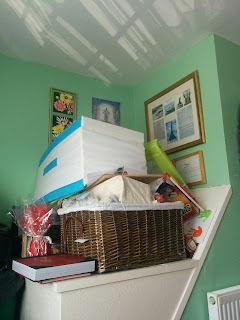 With my Mum having downsized her home a few years ago a lot of "good" stuff was passed on to me. I didn't have to take it, but I felt that I did. I felt that I needed to make use of items that my Mum had paid good money for.

Adding my Mums items to my items, and of course the items that I've acquired saving for the Children meant that my home was a little... crowded.

As I read through the book, I realised that there was a lot of advice that I could take to heart and with General Conference coming up (where I "hide" in my bedroom for several hours whilst watching the broadcasts) put into practice.

And so that was the plan.

I was talking with Top Ender whilst we were in Ireland, and I talked about the book. I explained the concepts and asked Tops if she would like to read the book after I had finished it. Tops however had other plans.

The day after we got back from Ireland, Tops emptied all of her clothes, bags, shoes, underwear, coats, PJ's... everything that was clothing out on to her bedroom floor. And then I sat with her as we went through each piece of clothing.

Did she love it?
Did it fit?
Was it in good repair? 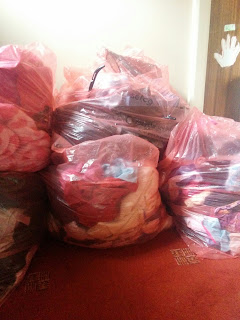 Two days later, I started on my bedroom. Within an hour I had got rid of 14 bags from my bedroom (I'll just point out three of them were actually from BB's room, but had for some reason ended up in my room instead of being taken to the Clothing bank!) and it was mainly spare bed linen but I also went through my clothes too.

I carried on whilst watching General Conference.

I went through paperwork. I found two missing Library books. I thinned out my Craft stash. I found my missing power cell. I went through Books. I found £1.70. I sorted through the wrapping paper and cards and ribbons for making beautiful gifts. I found space.

Eventually I'd got to a point where the bed was clear, the wardrobe was neat, the junk under the bed had been cleared, the hidden storage above the stairs was tidy, my drawers were neat and tidy...

There were at least 35 bags outside on my driveway. 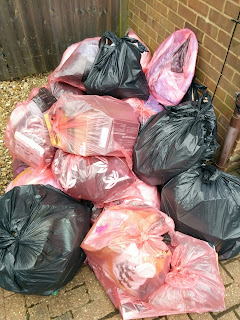 I lost count and wasn't going to count them all again.

Now the KonMari method isn't for everyone. And the way that she works it doesn't work well for a family who live in anything bigger than a two room apartment.

It was the idea however, the method of having to ask "Does this item spark joy?" and then thanking each item that I decided to part with or decided to keep that gave me permission to get rid of items that I'd previously kept and wouldn't consider throwing away.

Obviously, this has only been a few days since I've put the into practice, so I can't say if this is a long term thing or not. What I can say is, that I'm putting things away in my bedroom straight away. I'm happier looking around my room and seeing things that I love rather than seeing a collection of things obscuring the things that I love.

And Top Ender hasn't been told once to tidy her room or put away her washing. 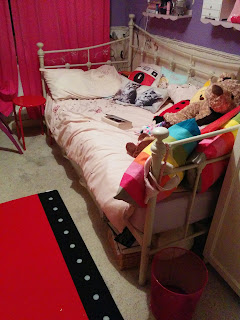 That is a miracle.

I'll try to remember to do a follow up post to this post in a few months and we'll see if I have managed to keep up the magic tidying!

*My friend Karen said this was her favourite quote when I told Facebook what I had done.
Chores Clothes Family Life Making A House A Home