- October 29, 2019
My family and I aren't normal. We like that we are different from the norm, that we're more like The Addams family than the people that live on our street and we were going to celebrate this and hang out together during the half term by going to the cinema to see the new animated Addams Family film (see the trailer here), coming home via the supermarket (I had a voucher to buy some bits from a lovely PR company) and making a few snacks together to share together and with some of our neighbours whom we haven't seen for a while.

And then I got sick.

The children were fantastic, looking after me whilst I dozed, giving me bottles of water and coming to chat to me and check I was okay every so often. They made lunch and supper together and after one trip downstairs to make sure they were okay in the early evening, I realised that they had even had some fun without me. 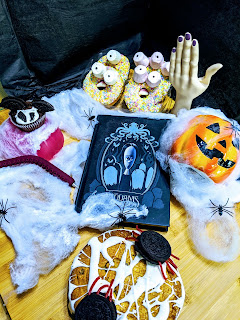 Whilst I'd been dozing Top Ender and Dan Jon had gone to a local supermarket and purchased the few items that I'd written on a shopping list for us to get on the way back from the cinema. Top Ender had even worked out how to use the voucher that had been given to me to buy the bits and pieces and then discussed together how to make what we'd chatted about, trying to remember the rough instructions I'd given when I said what I thought we could make. They even raided the Halloween bits and used some of The Addams Family bits we were sent to make the cakes look better in the photos!

They were being extra cautious and thought that I wouldn't want them to bake without some supervision, so they purchased some pre-made doughnuts and a cake and some cupcakes so they didn't have to make them without me and set to work together.

If we had made the doughnuts, we would have made them into Vampires instead of monsters, as they wouldn't have been quite so sprinkly/furry-faced looking, but I think their little derpy faces are even nicer than the vampire ones we would have made. 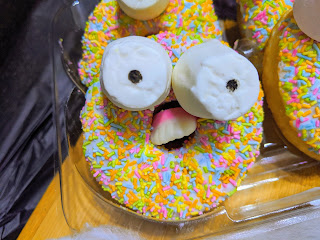 Dan Jon was mostly in charge of the doughnuts. He squeezed sweet teeth into the doughnut holes and "glued" marshmallow eyes to the doughnuts using a bit of melted marshmallow (that Top Ender had made for the cake below) and he drew a pupil on each of the marshmallows using my icing pens to allow the monsters to see!

Top Ender knew to melt the marshmallows to make spider webs all over the cake and whilst she did that Dan Jon made some menacing spiders to sit on top. To make the melted marshmallows, you just put some in a bowl in the microwave and then give them a good stir. After they've cooled a little, you can just pick up globs of the mixture and pull it to separate it a little to spread across the cake and look like web trails. 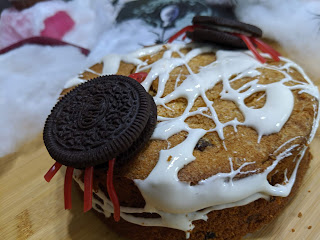 Apparently, they picked a farmhouse cake, because of the raisins being dead flies and spiders loving flies. The biscuit spiders were really simple to make, Dan Jon just twisted the Oreos into two halves before adding four strands of strawberry laces to make legs and stuck it to the still tacky web cake! 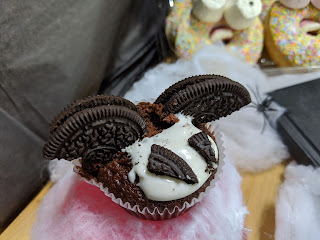 Dan Jon even made a bat cupcake, which I think is super cute, because it's sitting in the fridge waiting for me to get better so I can eat it!

So, I'm sitting in bed feeling glad that my children are rather like the children in the Addams family. That they love to play together, that they love each other and that they've gone above and beyond when I've been incapacitated.

Hopefully, I'll be feeling better soon and we can go and see the film at the cinema and maybe we'll make the ghosts (Tops didn't think she and DJ could make meringues together)
Family Life Film Halloween Treat Night