- October 06, 2019
When I was at University, I read this great thing that Jewish people used to do to try to "prove" that someone was Jewish and also to make someone feel more at ease, knowing that they were in a community that held the same values. They'd ask them about where they were from, and because the community was close, would then ask about someone who lived near there that they knew. If they knew them, then they were really Jewish, if they didn't then they may be pretending and not Jewish.

As I was tweeting about General Conference last night (well actually really early this morning), I realised that members of The Church of Jesus Christ of Latter-day Saints do something similar. 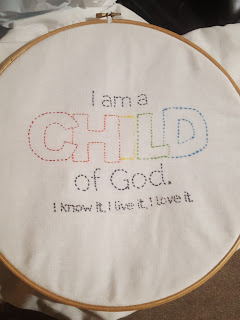 I got into a conversation with a fellow saint, from Scotland. We chatted about our thoughts from Conference, about what we were doing to stay awake (it was gone 1am), about what we thought might be said in a later talk, about where we lived and then about member families we knew that the other might know.

A few years back, a member in my ward, who later became a great friend, explained to the ward that her husbands boss had been worried when her family had moved from the USA to England, because previous employees had struggled with the move, and had asked to leave before their contract was up.

This family however seemed to be thriving and the boss wanted to know why. What made this family different?

The boss listened as my friend explained that when they moved, they moved into a community. People who held the same standards, who had the same beliefs, who were wanting to be their friends. They explained how their Church community didn't let them feel alone, didn't let them struggle. How things were familiar, even to the layout of the building being similar to back "home".

No matter where in the world you go, it is the same. Sure the language and accents change, but the truth is still the truth. The Prophet is still the Prophet. The Gospel is the Gospel.
Family Life Religion