Priscilla Queen of The Desert #Review

- October 01, 2019
Milton Keynes Theatre is nearly 20 years old, and you can read more about this later in the week (I know, it means nothing to you, but trust me you'll love how I make it relevant!) but this post is all about Top Ender and I going to see Priscilla Queen of the Desert, after Milton Keynes Theatre were kind enough to give us two tickets and make Top Ender's night by saying if she wants them, she can have some posters from the foyer for an upcoming show that we are going to see (Six, it's going to be brilliant!). which happened just as I took this picture, hence the slightly crazed look on her face! 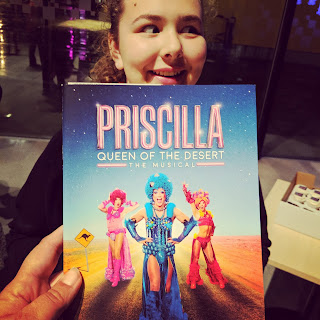 Everyone knows that this is a Road Trip movie, because Priscilla is a bus that takes three drag queens across the Australian outback set against some of the most iconic music of all time. I don't think that every knows that this show is high energy from the start to the finish and by the time the curtain was about to drop, everyone in the Theatre was itching to get up and have a boogie along to the tunes that were being belted out. 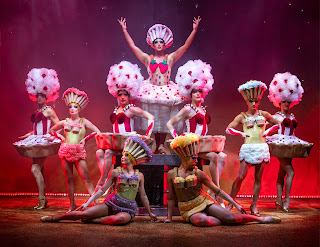 As Top Ender and I left the Theatre, I have never felt so much energy. Honestly, the whole audience was buzzing and it took Tops and I a good hour to calm down enough to even consider going to bed!

The cast was amazing, the costumes were fabulous and I still really, really, really want to be a Drag Queen. This really is a show that has to be experienced to be believed, and whilst I may not ever fulfill my dream of being a Drag Queen, and certainly won't be belting out Kylie from the top of Uluru (formerly known as Ayres Rock), I will be singing my favourite top tunes for the rest of the week!

Tickets are available from Milton Keynes Theatre, and to see where the tour is heading next click the link. OH! And make sure you pop into the toilets, for a little bit of mirror fun!

I was gifted two tickets, in exchange for this review. I also got a couple of glasses of OJ, and Top Ender had a cupcake.
Family Life Paid Day Out Review Theatre