- October 23, 2019
Last week, I was in the sort of mood where everything looked tasty, I didn't know it but my cycle was at the point where my hunger was up but thanks to my self-control I wasn't about to eat everything as I wanted! I went downstairs to see if there was anything that I could eat in the kitchen, that was healthy (there wasn't) or maybe persuade Flyfour that what he really wanted to do was make us some of the gluten-free mini pizzas that he often makes the children for lunch at the weekend.

As I'd gone downstairs and I saw a leaflet for a local pizza company sticking out the letterbox and exclaimed to Flyfour how I really fancied pizza now that I had seen the advert and then as I was looking at the advert a bit further saw there were chicken wings on sale too and decided that I fancied those too.

Of course, I wasn't going to buy them and as Flyfour said that he wasn't hungry, I gave up on the idea of Pizza, got a glass of water complained to Flyfour that I was annoyed that I was hungry when I should be not overeating and went back to bed to read my book and feel sorry for myself, as I was on the edge of a bad mood thanks to lack of pizza, the craving for pizza, the oncoming (although I didn't know it) period and because I felt like I had a cold coming.

About thirty minutes later, Flyfour came up the stairs, carrying something with him that he was trying to hide from the children and something that smelt rather yummy.

IT WAS PIZZA AND CHICKEN WINGS! 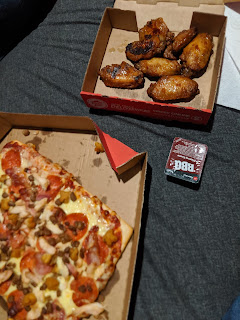 Honestly, there were no words to describe how awesome it was to sit on the bed eating gluten-free pizza and chicken wings together and just knowing that my husband loved me so much, so deeply and so completely that even though he hadn't originally fancied pizza, he was willing to order the things that I needed and share them with me.

I have a rather brilliant husband.
Family Life