- October 07, 2019
For what seems like years now, I've been looking to buy a piano. It needed to be quite good quality, it needed to sound nice and it needed to be in a price range that we could afford. It honestly felt like it was never going to happen and so I'd sort of given up a little when my sister sent me a message. Due to a few circumstances changing for her and her family (all good stuff!) they were needing to pass on their piano and if we wanted it, it was ours. 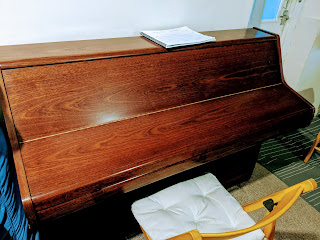 Flyfour and I decided not to tell Top Ender, but almost everyone we worked with knew what was going on. I was that excited, I even told the Postman who brings the post to work, and I also shared Flyfour's gluten-free Yorkshire Pudding recipe with him too, but that's another story.

We were pretty sure that Top Ender had overheard Flyfour and I talking and so knew there was a Piano coming, but she didn't know for sure, or indeed when, especially as our conversation was about how the movers weren't able to deliver it on a day that Flyfour happened to be working from home. Then, suddenly, they had a spare slot in their schedule and as my sister's home isn't that far from my house, they were able to squeeze a quick piano delivery in!

That evening as Top Ender walked into our living room, she saw the piano sitting half in the den, half in the living room, as Flyfour was waiting for me to move it. Her jaw dropped and I had to remind her that whilst she had been a big influence in my decision to look for a Piano, she was not the only one who was going to be using the Piano.

Sure enough, since the Piano being delivered, all of us have been playing. Practising hymns, songs from musicals. scales, 12 bar blues. I guess I should probably go and apologise to our neighbours!
Family Life Hobby life skills Making A House A Home Music