- October 08, 2019
One thing that Dan Jon has been excited about when going to Senior School, is taking part in weekly cooking lessons. Whilst he loves cooking and frequently does with me or his Dad, he is getting to the point where just helping isn't enough, and he wants to be making things on his own.

Of course, with having Food Tech lessons, it is all down to him.

The first dish he made, was Fruit Salad, which is why all weekend we have all been singing the classic Wiggles tune "Fruit Salad". 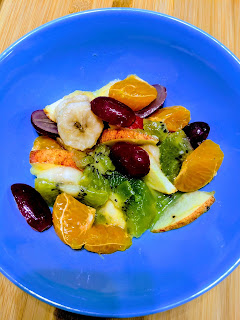 Dan Jon was so proud of himself and of what he had made, and rightly so as he had managed to cut things evenly, into good-sized chunks and we didn't find any bits of his fingers or odd bits of peel either!

Dan Jon, is a little like me however and needed a lot of reassurance that what he had made tasted good, that it was done well and that it was something that we had all enjoyed. It got to the point, that I suggested to him, that what he might like to do was to remake the Fruit Salad so that we could have it again. It was the only way I could think that would prove to him that we like what he had made!

So Dan Jon shut himself away in the Kitchen for ten minutes, whilst he made another fruit salad and again we all oohed and aahed over it and told him how great it was and how proud we were of him. I then suggested that maybe he would like make a Fruit Salad every week for the family to much on, as it would allow us to be a bit more healthy.

Dan Jon thinks this is a great idea, so I imagine we are going to see a lot more fruit salads in our future!
Breakfast Family Life Food Health Life Lessons life skills Snacks