- October 30, 2019
My favourite radio station, (Encore Radio) would often play songs from Musicals that I didn't know, but very quickly grew to love. One of the songs that I would often sing, along with Flyfour, was The History of Wrong Guys from Kinky Boots The Musical, and so when I was offered press tickets by Milton Keynes Theatre to see the musical, I knew that I had to take Flyfour so we could sing along and yell out "He's got a girlfriend you knob!". However, we almost didn't go thanks to Flyfour having to work and me being ill... I have never willed myself well so fast before!

Tops was most grateful for Flyfour's ticket, and thanked me by wearing my boots to the show. I didn't mind though, because she was rocking them and she really did look after me the last couple of days whilst I've been so poorly. 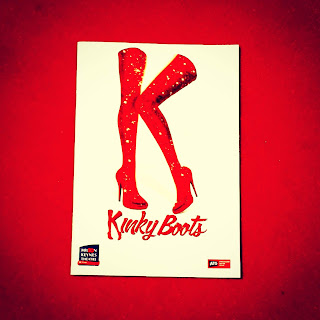 Kinky Boots, tells the story of a shoe factory in Northampton that is on the brink of closing down unless it can find a gap in the market. Well, it's either that or sell to a developer who wants to turn the factory site into a luxury development of flats. It's about accepting who you are, it's about accepting others for who they are and it's about shoes, well boots. 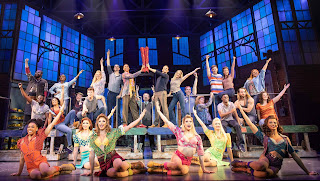 The high energy for the show starts before the show even starts properly with a cast member, in character, reminding the audience to turn off their phones and that it is rude to text during a performance too!

Then the songs started, and Top Ender and I had an agreement that we had made before we got into the Theatre that if either of us were singing too loudly we had to poke the other in the ribs to get them to be quiet! Luckily, we didn't sing very loudly at all and instead just really enjoyed the show.

In fact everyone around us enjoyed the show. Top Ender struck up a conversation with a lady in the bathroom (Tops noticed that she was wearing a libre like Dan Jon does) and they chatted about how much they were enjoying the show. The couple sitting behind us, had a great chat with us about how they were enjoying the show and how they wish they had known the songs before they came as they enjoyed the comedic moments so much they forgot to listen to some of the lyrics.

If you can, get to Milton Keynes to see Kinky Boots before it moves on to the next stop on the tour. You won't regret it!
Date Night Family Life Review Theatre