Making up a First Aid Kit

- October 24, 2010
Sometimes I have dreams that freak me out a little. I don't like eating a lot of meat because of a particularly odd dream I had about a giant chicken chasing me because I ate one of its eggs. I don't like reading a lot of Stephen King stories because of the nightmares I had after reading Cell and right now I am going through our First Aid Kit and making sure I have one for the car after having a very vivid dream about having an accident in our home... at least it wasn't a Polar bear in the Garden!

The thing is unlike a lot of other countries I don't think that we have set rules on what a First Aid Kit should contain. I have been looking at hundreds of different websites, and reading through a lot of Childcare books so that I can see what it is that I think that we need as a family. I know that my First Aid Skills could probably do with being refreshed, so I am looking for a course that is suitable for me. I did find that the British Red Cross have a new campaign aimed at 11-16 year olds called "Life. Live it.". I think this is fantastic, and I think that only good can come of our youth learning how to cope with an emergency. They actually have a competition running at the moment where you can win a chance to meet a player from Newcastle United, so if you know any fans under 16 encourage them to enter!

Until I do have my refresher course, and probably after I have been on the course I think that something that is really important for our First Aid Kit is that I get us a first-aid manual. One that has big pictures that are easy to follow. Something a bit like the St Johns, St Andrews and British Red Cross one that I found on Amazon. I think that the bigger the pictures the better, as that way as I am panicking and trying to deal with a medical emergency if I need it, there will be some nice big clear instructions to follow.

There should be sterile gauze pads of different sizes and adhesive bandages in several sizesthis way not only will I have different sizes for different cuts, but also ones that are relative to the size of the person. As part of this I would also have some adhesive tape and this again is because I know from past events that sometimes the only way to keep something in place is to use adhesive tape. 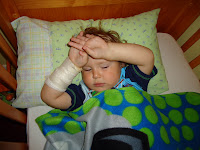 We do keep elastic bandages in our first aid kit as Daddy really badly twisted his ankle last winter when a broken kerb covered in snow gave way and caused him to fall. The problem was that he had to walk on the ankle everyday and so he needed the extra support for his ankle. Poor Daddy eh?

I would like to think that a splint wouldn't be needed, but I know that the likelihood of needing to keep a suspected broken arm or leg still is quite high. At home we would be able to improvise and use a newspaper or a magazine, but out and about in the car we would need something that would keep even Baby Boy still. I'm thinking a mallet.

Antiseptic wipes are already here and in plentiful supply. After having seen what happened to a friend who didn't clean a cut as well as she should of and the very yucky infection that came in afterwards I know that to make sure that a wound and around the wound is clean is an important part of First Aid. For the same reason its important to have soap antibiotic ointment and other antiseptic products (like Savlon) are important. 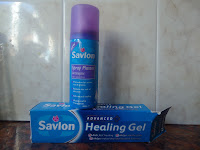 A hydrocortisone cream to stop itches or reduce inflammation is a good bet, as is something like Calamine Lotion and an anti-histamine oral solution (like Piriton) as there is always something out there wanting to bite you or could cause you to need to scratch!

Paracetamol and ibuprofen are a needed painkiller in anyone's first aid kit. As well as tablet form for adults, remember something like Calpol or Nurofen for children and of course a dropper could be a lifesaver for trying to get it into a small child!

Tweezers, sharp scissors, and safety pins, should all be included in the First Aid Kit for removal of at best splinters and at worse something like glass, cutting bandages or clothing and of course holding bandages and slings together!

We got caught out when we all had Swine flu and we didn't have a digital thermometer at my Nan's house to take Top Ender's temperature. As we weren't ill at the time we were able to pick one up so we now have three. I think that keeping one in the car would be a good idea, as it would help us if we got ill when we were away again!

We keep plastic non-latex gloves and disposable mouth masks in supply, not only do they make an excellent last minute Halloween costume, but they are good for when dealing with yucky things! 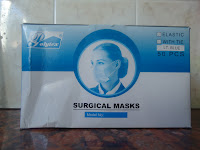 Hopefully that is everything that could be needed in a First Aid Kit covered, but I am sure I have forgotten something. Is there anything that you wouldn't be without in your first aid kit?
Family Life