- October 10, 2010
I was talking on Twitter asking for suggestions of films from the Eighties to add to a list of films that Daddy should watch with me on Date Night, when I came up with an idea for a meme from something that Home Front Anna said. One that I don't think has been done, but even if it has deserves to be made popular again! So I am proud to announce the My Life (If It Were A Film) Meme!

Right I shall go first then seeing as I made it up.

I have often said that my life is like a British Sitcom but in all honestly I sometimes wonder if I am not in a British version of The Truman Show. 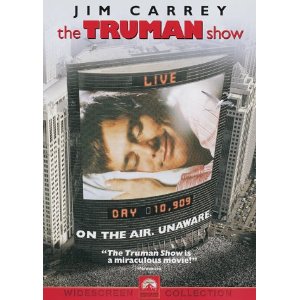 Its not that I am so up myself that I think you are all watching my every movement, but just that sometimes things happen to me that have to have been scripted, planned with every tiny detail taken care of and planned for in such a way that those around me know how I will react. I am not making fun of those who suffer from "The Truman Show Delusion" (it's a real condition) but I do have to ask myself at times if things are being orchastrated or if I am just predictable... bet you knew I was going to say that!

I do love the film, not just because of the Christian parallels, or the Utopian ideals or the social commentry on what we watch, or even because I remember going to the cinema to watch it with a group of friends but because it is about taking control. Everyday Truman wonders about what life could of been like, wonders about what could happen if he took a risk and got over his fears. And he does.

I am lucky, I know that my life isn't scripted or acted out. The people in my life are in my life because I and they chose for them to be. They all love me and I love them and I do live in a nearly perfect world. And so I shall leave you with mine and Truman's catchphrase from the film and the reason that I was tweeting about taking my photo laying on a table;

In case I don't see you ... good afternoon, good evening, and good night!