- October 05, 2010
On Saturday I was lucky enough to go and see Emma for her birthday. I had read a tweet from Jon (her other half) about a gigantic spider, but didn't really think anything of it. I'm not really that scared of spiders, I mean that urban myth about you eating spiders whilst your asleep wasn't ever something that thrilled me to know, but little money spiders aren't going to do me any harm.

I'm not a fan of Scary Spiders though, you know the sort they are often found on street corners drinking cider that they have convinced someone to buy for them... oh wait that's yobs... Oh yes Scary Spiders, like Tarantulas or ones the size of dinner plates, but we don't get them in the UK unless they are someones pet, and if you know me and you have a dinner plate sized spider DO NOT TELL ME. I will bring bug spray and kill it, I don't care if it is gentle.

So I get told about the giant spider, and how it was as big as a small car (okay so they didn't say that, but I knew that is what they meant) and it wasn't until Emma found the spider behind the sofa again that I realised they weren't exaggerating.

The Spider was HUGE.

No really, it was MASSIVE.

Now we have a problem though. Emma thinks I am level headed and normal. Emma has jumped from where she was sitting on the sofa to the other side of the living room, clearly terrified of the spider the size of a miniature pony. She had after all just stroked the Spider thinking it was a cushion.

Well obviously I took a pint glass from the kitchen, trapped the spider and then using an envelope threw the spider out of the front door, asking it not to return unless it had a job and was able to pay a share of the Phone bill.

Actually that's not true. What I did really was trap the Spider and then ask Emma to pass me my camera so I could take a photo for a blog post (this blog post funny enough) and whilst I was taking the photo realise that the spider was big enough to lift the pint glass and walk away if it really wanted to and then panic that the Spider might not like me taking its photo. 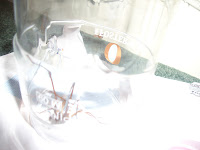 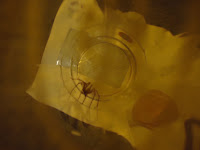 At least I didn't scream like a girl Jon eh?
Family Life