- October 23, 2010
I love food, and if I am invited out to dinner then nine times out of ten I won't say No. I will check with the host that they know that I don't drink alcohol and prefer to not eat food cooked with alcohol, but other than that you can pretty much take me anywhere and feed me anything. When I received an invitation to a special dinner party where all the dishes would be made to include one secret ingredient I couldn't say No and so I found my way into Central London one evening promising Top Ender, Daddy and Baby Boy that I would tell them what the secret ingredient was as soon as I got home.

When I got into the venue the first thing I saw was this poster. 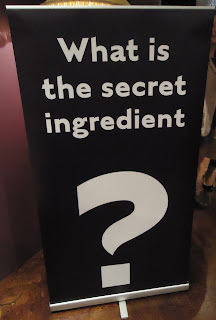 I tried to see if it said anything underneath, but it didn't and then suddenly I was handed a very nice looking mocktail, that I can't remember the name of or what it had in it apart from black pepper and introduced to Paul Rankin! He was lovely and very friendly and only a little confused as to what it was that I did (blog wise) but we soon were swapping stories. As more bloggers arrived, they were handed similar drinks (they had alcohol in!) and we hardly finished our drink before it was topped up. 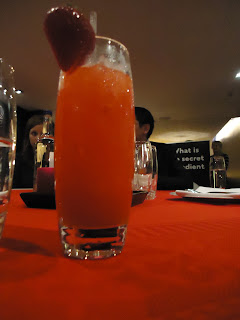 The other bloggers (who were food bloggers) and I were impressed but we were more interested in the food that arrived and we all had our idea on what the Secret ingredient could be and in the end nearly everyone apart from me had worked it out.

I was surprised that even though there were four tables set for nine, only seven bloggers were invited. Surprised, but pleased as it was rather like a dinner party and we were all able to chat with each other, as we moved from table to table and from categories of meals! The first table that we sat at was what someone might serve as a late supper. We were presented with Mango Salsa Chicken and Chicken Quesadillas and they were both very scrummy. 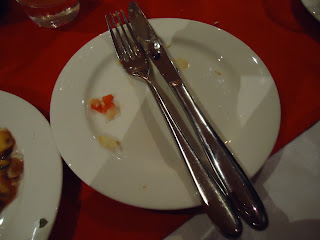 So scrummy that I forgot to take a picture of it before I ate them. It was most amusing though as EuWen decided that I was quite odd for taking photos of empty plates. Its like he's known me for years.

We then moved on to the Midweek Suppers menu and were given a portion of Spaghetti Bolognaise and Cottage Pie. I was a little worried for Carla because she doesn't like carrots and both dishes had them in, but she bravely battled on with them and I did take her photo of her having eaten them but its come out all blurry. These were really nice meals and something that I think that both Top Ender and Baby Boy would eat (as has been proved when Daddy made Shepperds pie/Cottage pie and both Top Ender and Baby Boy ate it all!) a large portion!

We then moved on to the Asian Fusion dishes which was Asian Salmon Salad and a Curry (but I don't know what it was in it) and they again were really yummy and I was thinking that this would be something that I would make for a romantic dinner at home for Daddy and I. I got to talk with Octavia and Laura and Cassie between mouth fulls of supper.

We were then brought out pudding which was a very lovely cake, and tasted similar to me to the Mixed Spice biscuits that I had made a few days before. 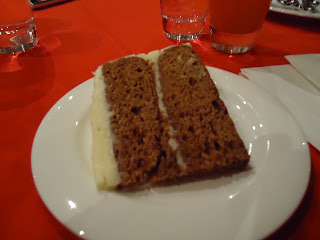 Paul then let us make a guess at what the secret ingredient was before confirming that it was Heinz Tomato Ketchup! I know, Ketchup in a cake! Apparently there a lots of dishes that even Michelin starred restaurants use Ketchup in, and to prove that point they have a recipe book full of 24 ideas in which you can see that a squirt of Ketchup can really enhance the flavour of a dish!

Thinking back my Mum always made Seafood Dip with a squirt or three of Ketchup so I thought that I would share that recipe with you all too, especially as with Christmas coming up you might want to make this as its great at parties! It does make a rather lot, and we never really used exact measurements, but I have never found any left at the end of a party and have often been asked to bring it instead of a bottle!

An Onion (White, but red would be pretty)
Crab Sticks (the pink and white fish sticks)
Mayonnaise
Garlic Paste (Just a squirt)
Tomato Ketchup (A couple of big Squirts)
Seasoning to taste

Give the onion and crab sticks a good stir and add in a few dollops of mayonnaise with a squirt of Garlic paste. Stir in, and add more mayonnaise and a few squirts of Tomato Ketchup. The tomato will enhance the flavour and will also give it a nice pink colour!

Make sure that it is a spreadable consistency and if not add more mayonnaise until your happy with it! Add seasoning to taste, which does mean you get to keep having a try!

Serve with Crudities or wrapped in Smoked Salmon for Salmon Parcels with a bit or a twist!

I have looked everywhere for a picture of it, but it seems it is the one thing that I or my family haven't taken a picture of. If you make it, send me a picture won't you?! 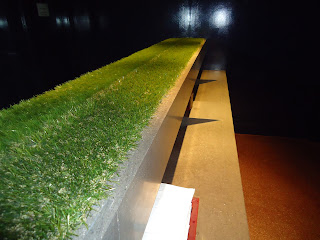