The Sound of Autumn

- October 21, 2010
A few days back, Daddy, Top Ender, Baby Boy and I were walking past a rather large pile of crisp autumn leaves. We knew that this was an opportunity too good to miss and so Top Ender and Baby Boy had a jump and kick and run in the leaves, whilst I fished about in my handbag for my camera. 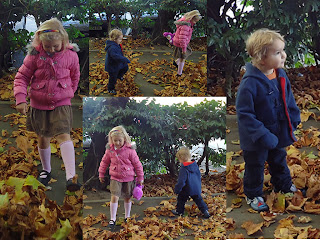 I got some great photos, which I used in my Wordless Wednesday Post earlier this month, and also a bit of video because as Daddy pointed out the best part about kicking and running about in leaves is the sound!

It got me to thinking about the sounds of Autumn and the sounds of other seasons too. I don't mean the Vivaldi Concertos, (or Haydns or Glazunov!) or even any of the pop songs that you might associate with certain times of the year! There are sounds (and smells but that's another blog post!) that to me mean that a certain time has well and truly arrived.

For me the sounds of Autumn are all about crunching leaves, the clunk of conkers hitting each other and the roar of the Hot Air Balloons that scatter themselves across the sky.

The sounds of Winter are a lot of muffled sounds, the crunch of boots on snow, the sound of a whistling wind as you sit warm indoors and of course all the sounds you think are linked to Christmas!

The sounds of Summer are so varied, but the ones that stand out for me is the quiet hum of a neighbours lawnmower, the tinkle of an ice-cream van, and prehaps the sounds of waves crashing on to a beach.

So what sounds like Autumn, Winter, Spring and Summer to you?
Autumn Family Life