- August 23, 2013
Top Ender is a big fan of Barbie and all her movies, I've mentioned before that she knows when new films are coming out and has them marked on her calender, so it was great to surprise her earlier this month with a chance to watch the new film Barbie Mariposa And The Fairy Princess, which isn't out until the 26th August 2013 here in the UK. 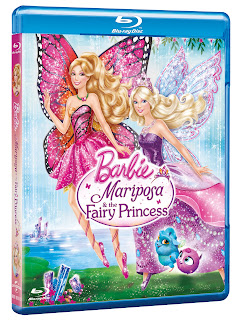 Top Ender was thrilled and even Big Boy sat to watch the film because whilst he pretends he isn't that keen on the Barbie films they are secretly something he enjoys!

The story of the film follows Mariposa who has been sent as an emissary to Shimmervale from Flutterfield, (both remote kingdoms in Fairytopia) to reunite them after both Kingdoms had a falling out many years before over a misunderstanding about Crystals belonging to Shimmervale. The Fairies of each Kingdom believe the Fairies of the other Kingdom to be the bad ones, with fairytale (ha!) type stories of the evil deeds that the others do.

It's not long though before Mariposa makes friends with Carania, the Princess of Shimmervale, and the two girls learn about each others kingdoms and customs and Carania explains why she doesn't fly, but instead either rides her Pegasus (called Princess) or is pulled in a chariot pulled by the flying Pegasus.

Of course it wouldn't be a Barbie film without a real evil character that threatens to destroy the kingdom offilm is sweet Shimmervale and an evil fairy fills that role quite nicely. Mariposa and Carania must find a way to save Shimmervale and all the fairies who live there.

The film has a Universal rating and is available on DVD and Blu-ray from August 26th, although you can pre order now or enter my competition to win a copy of the DVD.

We were sent a copy of the DVD to review.
Film Meme Review Wordless Wednesday