- August 29, 2013
I've said before that we're big on using Tablets in our family, there are actually more tablets in our house than there are people and as we each use them in different ways, we knew we could test out the new HP Slate 7 Tablet to its full capacity.

Daddy set the tablet up. He's the go-to guy for things like this, manly because he knows all the WIFI passwords (we have several) and also because when there is then an issue he's the one to sort it out and so if he knows how the tablet should be set up, he can find out what's wrong more quickly! Daddy used the tablet to tweet and to check his emails and do some general web browsing. As it runs Android, he found that it was just the same as the other tablets we have in the house (which all run Android) and although it wasn't the most up to date version it was more than capable of doing what we all needed it to do. The web browsing wasn't the most comfortable experience, but as Daddy said if he wanted to do some serious browsing he'd use a PC because the screen size is better and he wouldn't have to worry about waiting for the tablet to catch up with what he'd asked it to do. 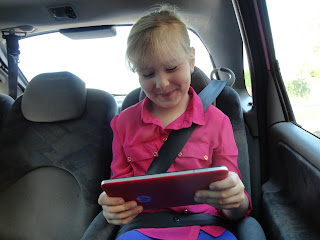 Top Ender managed to get hold of the tablet next. She installed Minecraft and a couple of other games that she loves and played away on a car journey happily. She noticed a little lag in some games, but overall thought it comparable to her Samsung Galaxy Tab 2 7.0, and she thought that the screen wasn't as bright or as clear, but Daddy thought they were much the same. 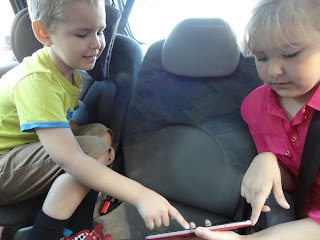 Big Boy got hold of the tablet next, he's a fan of Youtube and loves to watch Youtube on his tablet (he had a Acer Iconia B1 and he now has a Samsung like Top Ender) and make his own videos. The quality of the video was blocky, but then Big Boy is 5 so he didn't care.

When I eventually got the tablet I wanted to catch up on some TV shows that I had missed in the last few days. I tend to do this over breakfast in the garden (when it isn't raining that is) and try not to wear headphones because that way I can hear the children. The problem with the HP Slate 7 is the same as I have with my Google Nexus 7, unless I'm wearing headphones the speakers just aren't good enough.

I did think the battery life was disappointing, I used it as my "work" tablet for a day and found I had to charge it after about five hours. If this was Daddy's, then I think watching something on his commute to work, doing a few bits and pieces during the day and listening to music would wipe it out before his commute home and leave him looking miserably out the train window.

The tablet is only £99.99, which is one of the cheapest tablets on the market and as always you do get what you pay for. Personally I think the tablet is worth the money if you are looking to buy something for your children to use and to keep them off your device.
Family Life Review Technology