- August 27, 2013
If this summer has taught me anything, it's that children (and Mummy) and their gadgets are hard to part. Even if it's 30 degrees outside, with weather men laying odds on a second  Cretaceous Thermal Maximum*, you are often to find the family on the sofa clinging to a Tablet PC, Nintendo DS or Phone.

Fortunately, most of these devices are portable (with the exception of the Xbox, but even then I swear Big Boy is making plans to put it on wheels), so the garden is not out of bounds. When we were given the opportunity to test the new BT Home Hub 4 ADSL Wireless router, I said I would definitely be interested - because this version of the Home Hub is being advertised on the basis that it offers a better WiFi signal, and for me - in a moderate suburban house - the only real "slow spot" as far as WiFi goes is the Garden. 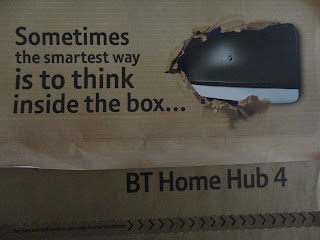 We have had the previous version, the BT Home Hub 3, since our fibre-to-the-cabinet based ADSL service was installed about 18 months ago. Cosmetically the two devices are mildly different, the later device slightly smaller in most dimensions - small enough in fact to put through a letterbox, negating the need to wait in for the delivery. Unfortunately it still doesn't have the ability to wall mount it - typically a device like this, once set up, doesn't need to be revisited - so I can't imagine why I would want to display it on a windowsill or tabletop; much preferable to hide behind a curtain!

The main technical difference relates, as I said before, to the WiFi capabilities. The Home Hub 3 was compatible with 802.11 b, g and n devices in the 2.4Ghz band. This covers all the devices we have that use wireless, from Tablets to Phones, Games Consoles to Sky boxes and Laptops to Wireless CCTV cameras. The Home Hub 4 has the same capabilities, but has introduced a new 5Ghz band - the new frequency is - for now at least - clearer of WiFi congestion, and not affected by interference from Microwaves, Baby Monitors and Fluorescent Lights.

The downside is, it requires your "device" to support 5Ghz connectivity - with the exception of some of the latest Android phones and the iPhone 5 (none of which we own) which support this, the only other way to benefit is with a 5Ghz dual-band USB adapter in your PC - but I have to admit our main PC is connected by a wire to the Home Hub because I find it pretty important to squeeze as much speed from the internet connection as I can, and a wire is still the best way to do that.

So, bearing in mind I had no ability to test the 5Ghz functionality, I conducted some (largely un-scientific) tests to compare the more commonly used 2.4Ghz WiFi on the Home Hub 4 to the older Home Hub 3 to see just how much better the signal would be around my house, and importantly in the garden. In all these tests, I took 3 readings and report the average, and both tests were conducted independently (ie. only one of the two devices powered) and with other internet use suspended. 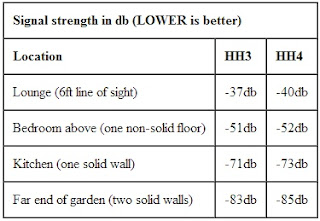 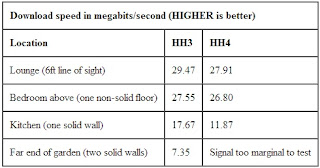 What this reveals, disappointingly, is that the Home Hub 4 is sub-par to the Home Hub 3 on both range and speed - and unfortunately the signal was so poor in the Garden, where I was hoping it would excel, I couldn't even perform a speed test.

It is entirely probable that the Home Hub 4 would excel on its 5Ghz band, if I had such a device to test it, however it is telling that on the BT website they advise that the 5Ghz band has a SHORTER range than the 2.4Ghz band, and that most devices will drop down to the slower band the further you get from the router.
With this in mind, I have retained the Home Hub 3 as just a simple WiFi access point, as that offers the best overall speed and signal strength. As I update and change the rest of my devices over time, I expect to find the Home Hub 4 will come into its own due to the 5Ghz band... just not in the garden!

(*opposite of Ice Age)

We were sent the BT Home Hub to review and as you can see Daddy's been totally honest!
Review Technology