I Solemnly Swear I'm Up To No Good

- August 28, 2013
Big Boy and Top Ender are rather big fans of Youtube videos. They have realised that if they have a problem getting through a level on a computer game, or they want to learn how to do something, or they want to watch a favourite music video that YouTube normally has the video they are after. I don't mind, I think it's good that the children are learning to be independent, and if it means that I don't have to go and finish a game level for them, then all the better.

We do have a rule though.

If the person in the video swears, we turn it off. No ifs no buts (no coconuts). 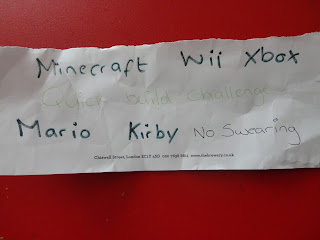 We make it a little easier, by selecting videos by people who don't swear and videos on channels we have watched before and so have "vetted". So it was a little bit of a surprise the other day when Big Boy was sitting in the back of the car and I had to break a little faster than normal and he exclaimed;

That's right, he beeped himself.

Apparently one of the no swearing videos that he watches on Youtube, is no swearing because it uses a tone to beep out the swearing words.

"It's okay though Mummy, I'm not swearing am I!"

Well, actually no, it's not okay and now this particular Youtube channel is banned from our house.