- August 17, 2013
I wasn't around when Tank! Tank! Tank! was first discovered in our house, it was downloaded by Daddy and Big Boy who despite the negative reviews they had found online thought it looked rather cool. It was the only thing that Big Boy wanted to talk to me about when I got home and after my first go I must admit I was hooked too and had to persuade Daddy that it was worth the £1.99 to open up the game to be played more than three times every twelve hours.

Despite there being four different areas to the game (once you've brought the fourth section "My Kong"), the idea of the game is really simple. You are in a tank and have to shoot the other players and destroy them, before they destroy you. If you are destroyed you are soon re-spawned, or deployed as the game screen states, and the loss of a tank is just counted against you in the final tally of how many you destroyed (or how much damage you dealt out) versus how many times you were destroyed. 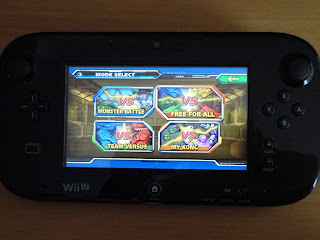 One of the best parts of the game is using the Wii U console to take a photo of yourself with superimposed helmets or face paints on, which should/could be a game all in itself and No, I didn't mistake a picture of Top Ender for me for the best part of two days...

We have spent £12 so far on the game, as we brought a couple of extra locations to do battle in (£1.99 each), in addition to buying the My Kong part of the game (£7.99) so we could play more frequently than every twelve hours and also the My Kong game too.  For a grand total of £12 I don't think that is bad, although I can see it costing a lot more as Top Ender and Big Boy start requesting yet more locations to fight in with the promise of giving us their pocket money to cover the purchases. 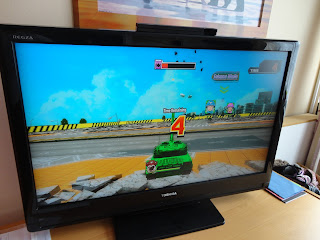 The game controls are so easy to pick up that Five year old Big Boy is able to play and beat Daddy and I (or maybe Daddy and I just let him win every so often to keep him interested) and we are still having fun because it really is a funny and addictive game.

We didn't get this game free, we paid for it, and I shouldn't have to declare this but I am because I want everyone to know how fab this game is and to know I'm not just saying that because I got it for free.