- December 02, 2014
This Christmas the children and I are giving their teachers, two gifts for Christmas. The second gift, I can't talk about just yet as I happen to know that a few staff members occasionally read this blog and I don't want to spoil their surprises, but the first gift was given to them yesterday morning, and hopefully the two teachers who were away yesterday are back today and will get theirs today, so I can talk about these! And if they aren't back... well, stop reading now!!

A few months ago, my sister and I were having a conversation about some different things we had seen on Pinterest and thought the other would like, (We've now created a board to pin to together because, that's like the smart thing to do) one of the things that was mentioned were Tea Wreaths and I think that my sister was telling me as she wanted me to make one for her, if I got her in the Family Secret Santa draw.

It was a couple of days later that I happened to bump into two of Top Ender's teachers having a cup of tea during break time. A conversation started about different teas (as you know I don't drink tea, and one of the teachers doesn't either but we both drink fruit teas and a few different herbal teas) and an idea formed in my head... which as you know is a dangerous thing. I discussed the idea with the children and we decided that what we should make an Advent Tea Wreath for the teachers who teach them at School. After a quick trip to various discount stores and Tesco we had all we needed to make an Advent Wreath for a grand total of £3 per wreath. A bargain if ever I saw one. 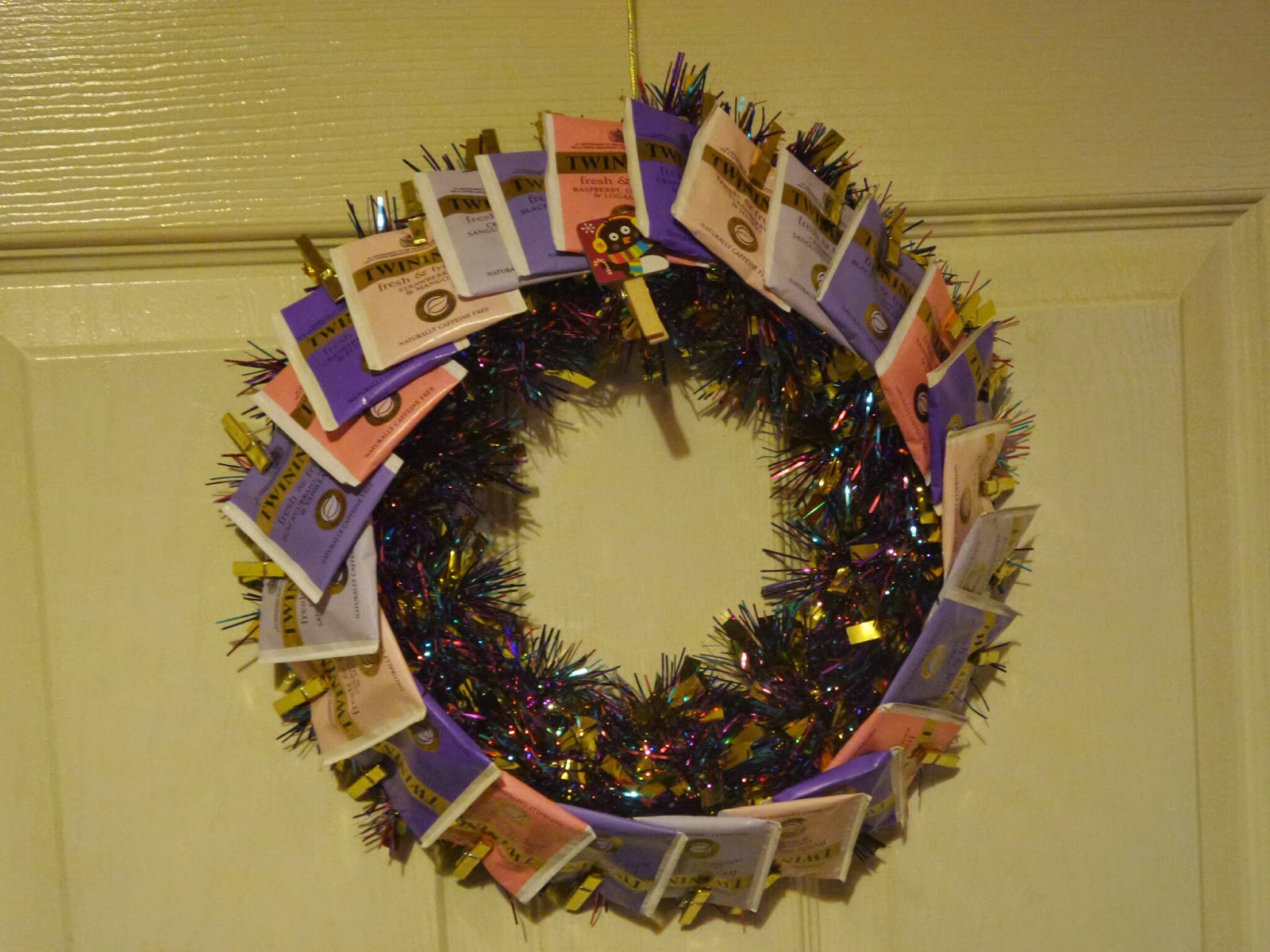 The children LOVED making the wreaths with me. We sat together Sunday afternoon, with twinkly fairy lights in the background and worked out the patterns we wanted for the various Teas and wreaths and then we used our gold pegs to clip them to the wreaths in the pattern the children had decided. 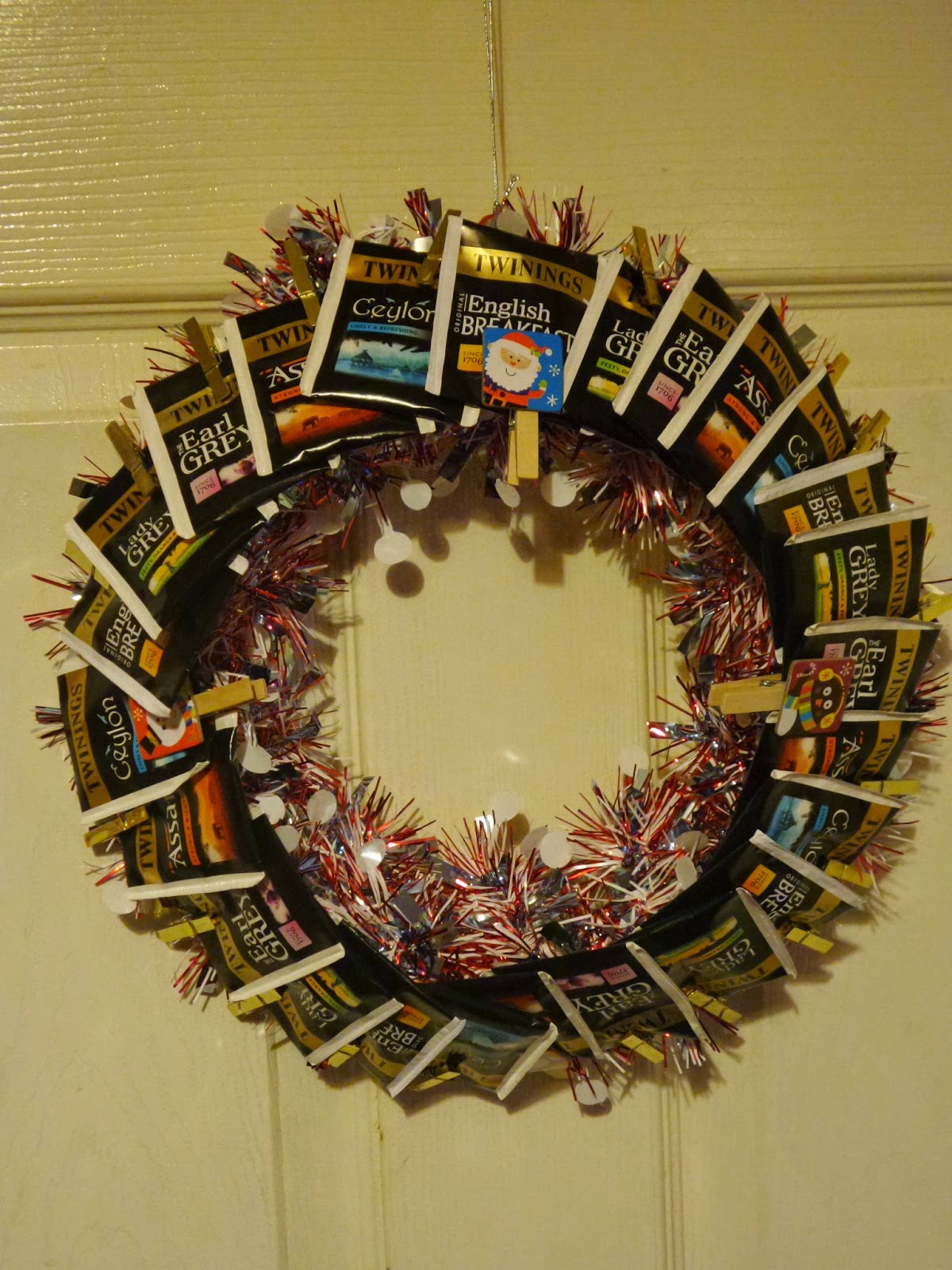 It was amazingly quick and easy, but I'm sure you'll agree that they look great. The idea of course, is that the Teachers will have one cup of tea each day of advent (although I'm sure that they will have a couple on a few days as they aren't at School on weekends!) and one staff member has decided to take theirs home and put it in their kitchen.

Now if you want to make them yourself, I purchased Twinings 25 Envelope Teabag multipacks in Tesco for £1.50 (they seem to be the same price across all major supermarkets) as I wanted to give each teacher a variety and this seemed the easiest way to achieve this without buying more than I needed. I purchased the tinsel wreaths from Poundland, but I could have made a cardboard or wire circle I just wasn't that way inclined! And lastly I got the pegs from a combination of Poundland and the 99p shop. I finished it off by adding a luggage tag wishing each teacher a merry Christmas, which the children signed. 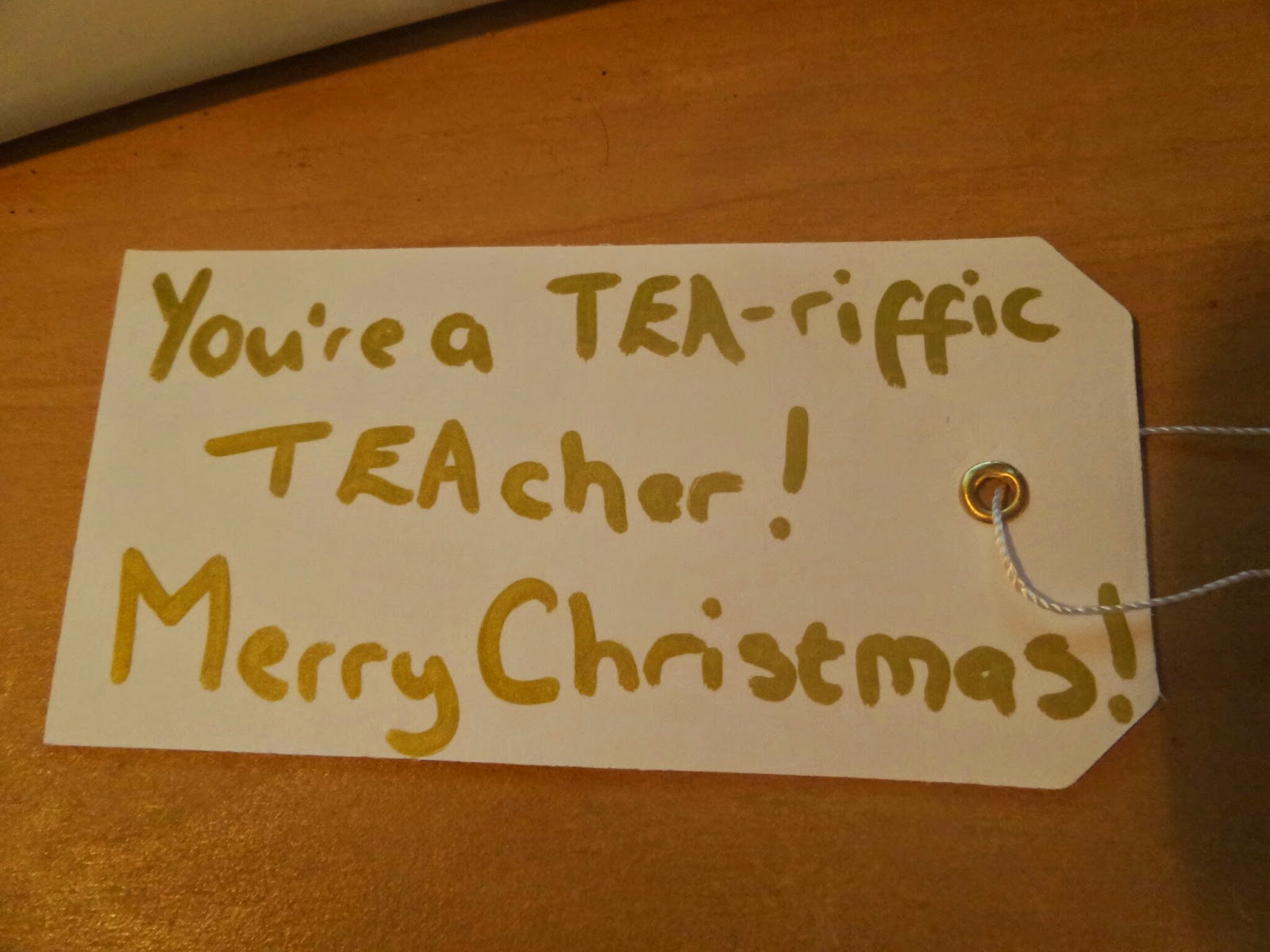 The teachers who have received their gift loved them, and some of the other parents who saw the gifts thought they were amazing (I did try to do it discreetly when no parents were around!)
Advent Christmas Craft School