- December 13, 2014
It's no secret that here at A Mother's Ramblings, we love a computer game. Be it on the Wii, the Wii U, the Playstation (3, because I'm not made of money) or the Xbox (360 because again I'm not made of money!) or even on the PC if it's something that interests us then we save up for it. In fact BB currently has £60 saved in anticipation of a game coming out soon that he'll want. He isn't sure what it will be, but he knows that if he saves he'll be ready.

There were two games on the early drafts of the children's Christmas lists this year. Top Ender was very interested in The Sims 4 (It seems a love of The Sims is passed down genetically) and Big Boy was after Skylands Trap Team, for any platform.

Big Boy was making sure that he would get the game, as well as requesting it from Santa he was also saving up to buy Trap Team. As luck would have it we were invited to a launch party, along with some celebs (one of them was Danny Dyer and boy was my sister jealous. I told her that he kissed me, but in reality he just gave me one of those nod of the head "Wassup" type gestures as he backed away from me.) and game reviewers and the like and was given a copy of the game. Big Boy mentioned something about this blog being the best thing to ever happen to this family and then started playing Trap Team and filming himself doing so for his Youtube channel, so I had to be quiet.

The game is actually pretty much the talk of the playground at School. Almost every child I've spoken to (both male and female) has either asked Santa or their parents for the game or an older brother or sister has.

Playdates for Big Boy since he got the game have consisted of children coming round, making nice with me for a few minutes and then plonking themselves down with Big Boy for a half hour of Skylands Trap Team before moving on to other activities... like drawing characters that he'd like to be in the next Skylanders game!

Normally whilst Big Boy and his friends are downstairs, Top Ender escapes the chaos and hides away in her bedroom, where she plays The Sims 4.

If you haven't heard of The Sims before, it's basically how I think God must look at us sometimes. It's a simulation game, where the player (God) encourages a Sim (Human) to do various things. Like go to the toilet, study, work out etc. Occasionally you can mess with a Sim by cancelling it's action, and it drives them nuts. Like when you go into a room and can't remember why you went in there. 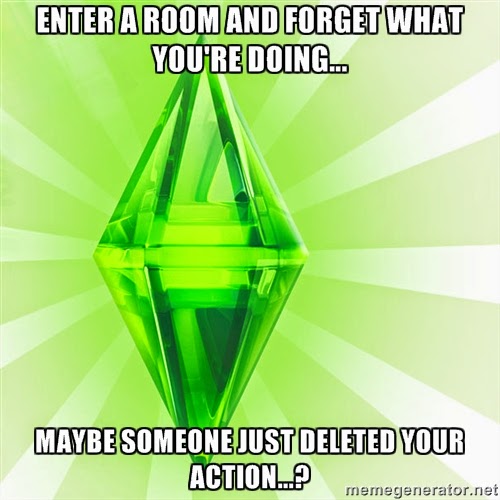 Anyway. Top Ender has spent HOURS playing this game, and as it is installed on the PC in her bedroom, I can't play it (which is the greater injustice here) without having to stand on her bed. And that's just annoying.

Tops has not stopped going on about how great the game is either. Which is even more annoying. In fact I'm starting to wish I hadn't let her get a review copy and just put my fingers in my ears when she asked if she was allowed to spend her money on it!

So. If you're looking for games this Christmas that would suit someone you know, I and the children would 100% recommend The Sims 4 and Skylanders Trap Team, just make sure if you give it to them after you've done all the family things you wanted to do, as you might not get a word out of them after they've opened the game!

We were sent the games to review.
Review Toys Wii U Game Review