A Day at the Auction Centre

- August 23, 2019
I have a list of things that I would like to do. Some things are expensive, like have a hotel room which you can swim up to or one with a secret hidden pool for my own exclusive use and gives a great view of some amazing vista. Others are less expensive, like having a posh afternoon tea or making an item of clothing from scratch and some could be expensive... like going to an Auction and placing a bid, or rather placing a bit and winning!

We arrived early and walked around all the lots, spotting a few extras that we hadn't noticed in the listings and planned our strategy for the day. We won a few lots that we were wanting, such as a Crock-pot Express and a smokeless grill, but there was one thing that I really wanted.

When we'd looked through the catalogue, there was a painting that had caught my eye because of its name. It was called;

Flyfour let me bid for it and having watched a few other lots, I knew to wait until the auctioneer went down to the lowest opening bit of £2 before placing my own bid and surprise the one and only bid was mine and I won the painting! 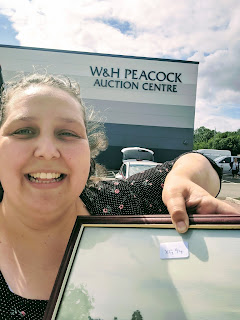 Yes, I know I said it cost £3, but that was because of the VAT that needed to be applied and seriously it's a bargain of a price and I was so excited! Now, we just need to work out where we are going to hang the painting and of course, we need to work out which farm and slip road of the M25 it is. Anybody want to come with me all around the M25 to see if we can find it?
Birthday Bucket List Family Life