- August 10, 2019
I love the Summer holidays and think that starting my job in September the Summer holidays are going to be the huge highlight of my year! It's funny, I was talking with some teacher friends who made me laugh when they were saying that the reason teachers have so many holidays is just so that they forget how hard working in a school can be! It's sort of a reset for all staff.

So, here's what we are eating this week. 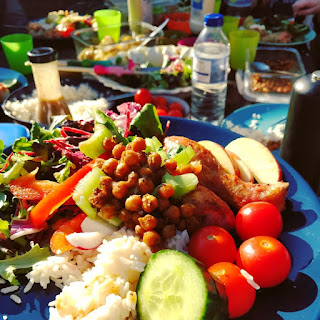 This has to be Flyfour's favourite meal and so having it every once in a while means that he's happy and the rest of us just kinda put up with it. However, I'm bribing the children with Sausage pie later in the week, so we'll be good!

Sunday - Toad in the Hole with Beans or Peas


Dan Jon let me know that he was really wanting Yorkshire Pudding this coming week. He didn't mind if it had Sausages in it, Chicken, Beef or plain old mashed potato, as long as he had Yorkshire Pudding! We figured that Toad in the hole was a good idea as everyone loves it.


I love Smoked Fish, it's one of my favourite ways to eat fish if I'm honest. However, the family don't feel the same so I have to smuggle it in and tonight I'm smuggling it!


This was one of my favourite Salads back in February. In fact, I think that it was the overall winner of the best Salad for the month. All I know is as long as there are some homemade Croutons that the children will be happy.


Spaghetti Carbonara is one of my favourite dishes. I kinda cheat when I make it because I don't make an egg-based sauce but instead a sort of creamy cheese-based white sauce. It has mushrooms, onion and bacon in it though, so I don't care if any Italians want to pick a fight with me!


When I was pregnant with Top Ender I filled my freezer with meals like this, ready for when I didn't want to cook after having had a baby. Tonight we're going to make some for us and for the freezer ready for nights I don't want to cook when I get home from work!


This is the reward for the children for having eaten the Fake Nando's earlier in the week. Sausage Pie is probably the one dish that in years to come they will ask me to make for them when they come to visit or are feeling sick and will be the one dish they think of when they tell their partners that nothing compares to their Mums cooking. 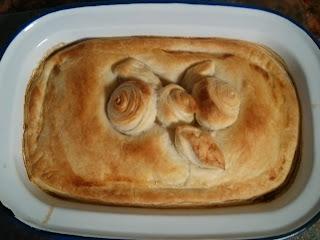 So that's what we are eating this week, how about you?
Family Life Food Main Meal Meal Plan