- August 22, 2019
In some areas of Milton Keynes, there is the ability to order food from local shops to be delivered to your home, by Robot. 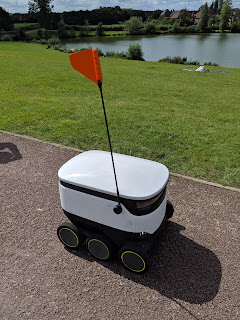 You just need the app to be able to order from Starship, and to live in one of the areas for delivery. The problem is that we don't live in one of these areas and so we can't order food to be delivered to our home! Instead, when we are out on our walks or driving in the areas that have the robots, we lookout for them making it a bit of a competition for who can see them first, or who can see the most.

Of course, we also keep a close eye on the app, to see if they have finally started delivering to homes in our area and if it takes much longer (which it will), we might have to move, so we also keep an eye out for houses we like in the areas where the Starship Robots do deliver to and I found a great one... now I just need to win a lot of money so I can afford it and all the deliveries I'll be accepting!


In the end, I decided if they didn't deliver to my home, maybe I should move temporarily to where they deliver. I did think about offering to house sit for a few friends whilst they were away, or just standing outside someone's house until my delivery arrived, but then I realised if I organised to have a picnic with the family at a local lake I could arrange to have the lunch delivered to us! Flyfour and I knew the plan, but we were keeping it secret from the children so that they'd have a bit of a surprise when the Robot turned up next to where we were sitting.

I'd told the children, that we were going to be having a picnic and if they were lucky that their Dad would join us on his lunch break (he was working from home but was very busy so might not have been able to join us), but made a big deal about there being a special guest that would be joining us and left it at that. The children were very excited, coming up with a wide range of ideas of who would be joining us, each idea more fantastical than the last! We took picnic blankets, books to read whilst waiting for our special guest and some gluten-free sandwiches for Flyfour. 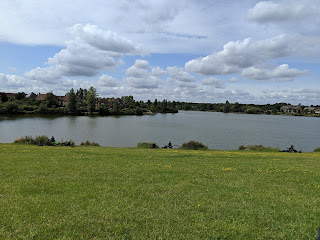 We sat at the lake, reading our books and having various conversations about everything from the Fisherman and houses we could see, to holidays we'd like to go on, things we'd learnt over the Summer and becoming accidental VSCO girls. The children kept an eye out, watching for families walking towards us that may have been bringing a picnic basket to us and may have been the special guest they had been promised.

It was just getting to the point where they were starting to think I had made up the picnic as an excuse to sit near the lake for an hour and were really sneaking them away to Five Guys for lunch when over the bridge came the robot carrying our lunch.

The children thought it was hilarious that I had ordered a robot to deliver to us in the middle of a park, whilst we were sitting next to a lake and to be honest, so did I, which was kind of the reason I had ordered the picnic to be delivered to us in the first place!

Using the app to order the lunch was really simple, and yes whilst I might not have been particularly pleased with the price of the sandwiches, it was really fun and something that we will be doing again in the future, I mean my Mum has already told me that she wants a picnic delivered to us when we are next out together and the children think it would be brilliant to have snacks delivered to us on our next walk and might encourage them to come out with us a bit more often!
Family Life Summer