I always found that the bucket at the end was the hardest part to balance in the game Mousetrap and when the performance of The Mousetrap at Milton Keynes Theatre was running late due to some technical difficulties, I guessed that this was the problem the production was having too. Of course, that was all a joke, I knew really that it wasn't the case, but it was a good giggle and the older couple sitting in front of Top Ender and I thought it was hilarious!

Now, there are a few things that I knew about The Mousetrap.

It is the longest-running play.

The audience is requested not to share whodunnit, so as to keep the mystery alive for other people.

It was written by Agatha Christie. 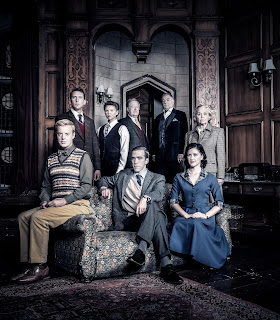 All I really knew though, was that I was really looking forward to see the show, as was Top Ender!

As we queued to pick up our tickets, we saw lots of children around, which surprised me but I was sure they would enjoy the show, I mean there is a murder (or two) but I assumed there wasn't going to be any bad language. As we were looking around, we bumped (quite literally) into some real grown-up friends who were also really looking forward to seeing the show too. We joked together about meeting in the theatre and catching up since we'd seen each other last, which was the day before!

Despite the delay to the start of the show, because of the technical difficulties, the audience remained in good spirits and when the show did start, the performances from the cast were brilliant. In fact, the show itself was brilliant and I can see why it has had such a long run in the West End and why so many people flock to see it time and again. One of my friends, when I'd told them I was going to see it said her next-door neighbour had been to London to see it five times and even Top Ender and I said we would quite happily go back again to see it.

The show is in Milton Keynes until August 24th, so if you can get down, I really recommend that you do!
Family Life Review Theatre