- August 26, 2019
As if there wasn't enough to worry about with Diabetes, at our last appointment with the Diabetic team, they mentioned they wanted Dan Jon to start going to annual eye checks too. We knew it was coming because with my Mum being a Type One Diabetic for so much longer than Dan Jon she has all the various appointments that one day Dan Jon will have too.

The appointment came. It was the last appointment I'll be able to take Dan Jon to for a while, with my new job starting, and so to me, it was a big thing and so Dan Jon and I sat together in the waiting room, cracking slightly inappropriate jokes, playing I-spy and having a good old chat.

Eventually, the nurse called Dan Jon's name and after a quick eye test put some drops into Dan Jon's eyes, and came back a few minutes later to put the dilating drops in too.

Then after a few more minutes of waiting, we got to meet with the Doctor. 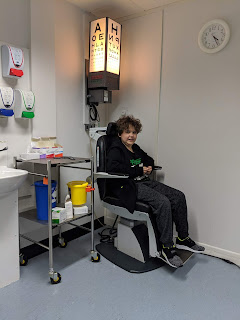 The Doctor was amazing.

After a little conversation and a bit of family history, she asked to speak with Dan Jon for a few minutes as if I wasn't in the room.

The Doctor started by asking Dan Jon if he knew why he was here. He confirmed he did and explained that it was an eye examination, for the medical staff to see how his eyes were and if any problems were developing. It's a way to play it safe he said, to check if issues were going to happen and didn't mean that they actually were happening.

The Doctor confirmed that was indeed the case and then asked to speak openly with Dan Jon. Dan Jon agreed. The Doctor started to explain about hormones and how shortly they would be rushing around his body and making him maybe act in ways that up until now he wouldn't have dreamt of.

I need you to make me a promise she furthered, looking Dan Jon in his eyes. 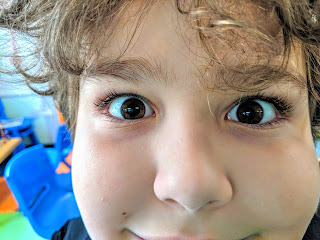 Over the next few years, I need you to keep all your medical appointments. We don't care if you don't smile at us or if you don't look any of us in the eye or even if you only grunt a response. We don't care if you smell, wear all black, wear hardly anything at all or as many layers as you can. All we care about is that you don't stand in the way of your health by missing appointments or not taking your medications. Can you promise me that you'll do your best to keep your appointments and take any medication?

Dan Jon nodded his agreement and the appointment continued, with an actual eye examination taking place and not just a promise being the reason for looking Dan Jon straight in the eyes.

We talked about it on the way home, Dan Jon saying that he hoped he wouldn't become the sort of teenager who stropped his way through life and that he would be able to keep his promise to look after his health. It made me a little jealous too, I wish I'd had someone that had bluntly told me this before the terrible teens started, but oh so lucky that a Doctor that had never met Dan Jon before had had enough experience to know that a lecture of sorts could have a big impact on that his future health.

I'm so glad the last appointment we went to together was one to remember.
Diabetes Family Life Health