- August 28, 2019
On Bank Holiday Monday, Dan Jon and I were having a bit of a lazy day. We'd both got up when we had wanted to (although my wake up time was a few hours before Dan Jon's) and after we were both dressed and ready to go we had an equally lazy breakfast at McDonald's before heading off for a walk at Ashland Lakes. Really, it was just so we could say we at least did one thing, rather than just sit at home all weekend whilst Flyfour and Top Ender were away camping. 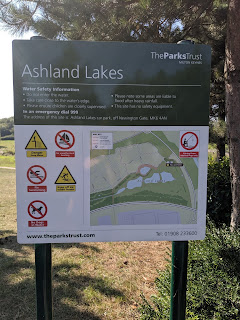 We used to go to Ashland Lakes quite a lot when the children were small, it was fun to walk across the stepping stones and try to not get our feet wet, but as they started to get more involved with clubs and activities after school, we eventually had no time to go.

Even the occasional picnics that my Mum and I would have at Ashland Lakes has dropped off as her balance has become more of an issue. I don't want her falling into the lake as I don't think I'd ever be able to get her out of the lake if that did happen! 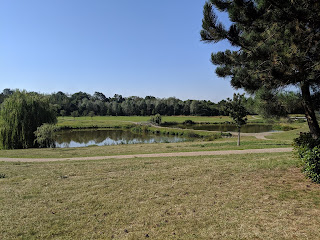 Dan Jon and I thought the lake looked beautiful, well apart from the odd bit of rubbish and a lot of algae in the lake. There is a bacteria problem or something in the lake and a disease that the fish have and together they are causing issues for fish, humans (so don't go swimming in it), cats and dogs. It was something to do with the heatwave last year, and from what my local fishermen friends told me the lake is going to be closed for fishing for some time.

Luckily, some of the lake is still beautiful and not overrun with the algae and Dan Jon and I spent ages standing on the bridge looking out at the view and admiring how beautiful it was. I think it helped that we were in the shade and that there was a little duck family to swim around keeping us amused with their antics. 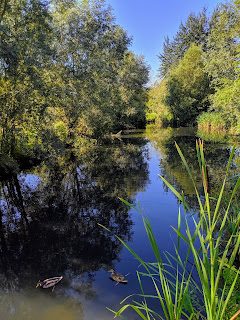 It wasn't just the three ducks on the top lake. We saw several ducks, geese, swans and a lot of seagulls who seemed to be laughing each time Dan Jon told a joke, so we weren't sure if they were actually listening to our conversation, or if they were just brilliant with their timing!

It was a lazy walk and as it was so warm, we didn't worry about walking up far enough to see the wave/snake sculpture that is between the lakes and the woods instead, going back to the comfort of the air conditioning in the Car.
Family Life Health Mental Health