Why Did Your Church Change Its Name?

- August 25, 2019
A couple of weeks ago I was talking with a friend who was a little confused. For as long as my friend has known me, I have been a member of a Christian church, I've not drunk alcohol and as well as the Bible, I also have an additional book of scripture called The Book of Mormon. To her, I was a Mormon or a Latter-day Saint, abbreviated to LDS on my social media profiles and a member of the Mormon Church.

My friend had met some Missionaries in her town and had been chatting with them and it was at this point that she had said something like "My friend Pippa is a Mormon" and they said something like "Oh, really? What ward does Pippa live in?". They had a nice conversation and that evening she called me, to have a chat and she mentioned she'd met her local Missionaries, but they hadn't belonged to the same Church as me and she was confused because she had thought they looked like they did. 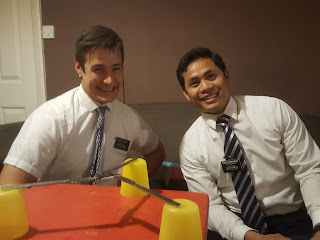 I assumed she meant that they looked like they were Missionaries, because it was two young men in white shirts and ties, looking smart and being polite, which she confirmed, but I was confused as to why she didn't think that we went to the same Church and assumed she'd got confused because of the whole ward/parish part of the conversation. It turned out, that actually she was confused because the name bages the Missionaries were wearing that proudly announce that the Missionaries are members of The Church of Jesus Christ of Latter-day Saints. I explained that is my Church and there was a pause before my friend asked;

Pippa, why did your Church change its name?

I was a little confused to start with, but then realised it wasn't that we changed the name of the Church, we have always been called The Church of Jesus Christ of Latter-day Saints, well since 1838 anyway. It was just that previously we've been known by nicknames or terms which could be derogatory and recently the Prophet of the Church has given the members a call to action to refer to the Church by its full and proper name.

So I explained all this to my friend.

She got it straight away. By calling the church by its proper name, it was a way of announcing to the world who the Church belonged to, who we were, what we stood for and what was important all in one fell swoop.

I'm proud to say that I am a member of The Church of Jesus Christ of Latter-day Saints, that I know that Christ is my Saviour and friend, that our Heavenly Father loves us all and wants us all to be happy and that by referring to my Church by its official name, I am showing the world, who I am, who I belong to, what I stand for and what is important to me.
Family Life Religion