- August 21, 2019
Flyfour and I love going for walks, sometimes I don't remember this and when he asks me I decline his offer to go but he had found a new park that he wanted us to walk around and it sounded fab and I was in a great mood and so didn't say no and I am so glad I didn't!

We went at about Sunset, which meant we got some beautiful photographs of the setting sun over the lake, and what you can't see, thanks to some clever positioning of the camera is the warehouse unit right by the lake... actually on three sides of the lake. 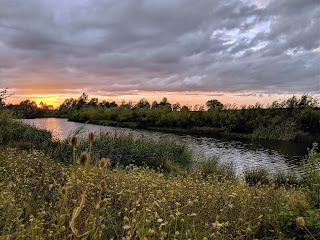 Flyfour and I chatted as always about what we could see, things like the swans and ducks on the lake, a rabbit that was up ahead on the path, a hare that was bouncing into the tall grass and then what I at first thought was a Golden Retriever bouncing about... but quickly realised was a Deer!

The deer were beautiful, but so FAST! I tried to take photographs of them so many times, but every shot is just another view of the park with no deer visible. 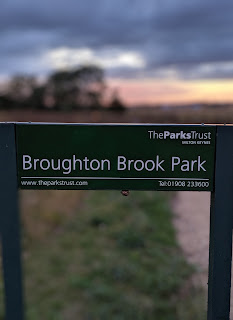 Flyfour and I had invited the children to join us on our walk, but they had said no but when we returned they told them that they had to come with us because we had seen so many Deer and seeing them so close was something they had to witness too.

So we went again the next day.

And all four of us tried to take a photograph of the Deer as they jumped away from where we were walking along the path, and again they were just so FAST that none of us managed it... well almost! As we were walking back to the car, we saw another Deer in our path so we stood still, waiting for it to reappear from the trees and finally it did. I was so excited and pleased with myself for having managed to get a photograph. 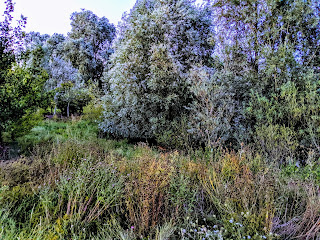 The walk is definitely one of our favourites, and one I'll be going on quite a lot over the next few months, trying to find yet more deer!
Date Night Family Life