- September 27, 2019
This coming weekend is mine and Flyfour's 18th Wedding Anniversary.

We are planning on being up north for our anniversary again, and then possibly at a Fireside if we return home early enough so Flyfour and I won't have a chance to sit together and just enjoy each other's company. Well apart from the very long car journey back to Milton Keynes, but that doesn't count as the children will be in the car too!

We decided because of the lack of time we'd have alone together, we'd spend some time together one night the week before our anniversary and share a bottle of Noughty, an organic, vegan, alcohol-free sparkling wine that I'd been sent to review. 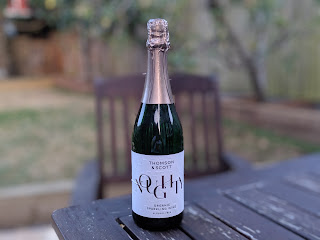 The problem was, with Flyfour being away in Kyiv and then working away from home, he was only going to be home two nights and those two nights? They are the nights that I'm out of the house doing one thing or another and so the only time we had together was the previous weekend.

Luckily, the weather was lovely on the Saturday evening and so we were able to spend some time together sitting in the garden listening to some of our favourite music and sharing the bottle of wine.

It was great. We were drinking out of mugs, because we don't have wine glasses and I thought a pint of wine was a little excessive...

The wine is/was lush. It was nice to be able to drink something with Flyfour that was suitable for both our needs, alcohol-free, gluten-free and the fact that is it low sugar and vegan? Well, it's just ticking boxes all over the place, isn't it.

You can buy Noughty from Harvey Nichols, John Lewis, Planet Organic and online via Amazon, and the company's own website.

I was sent a bottle for this review, the fact it came in time for my anniversary was just a happy coincidence.
Drinks Family Life Review