- September 03, 2019
When I heard that Shane Richie was going to be coming to Milton Keynes in The Entertainer, I was really excited. I knew about The Entertainer as it was a play I'd read when doing my Theatre Studies A-Level as it was by John Osborne (he of Look Back In Anger fame) and I read everything I could to try and give me a wide knowledge... also I think Shane Richie is lovely and so couldn't wait to see him in the role of Archie Rice. I was even more excited when I was given two press tickets to see it too.

As always, my theatre companion for the evening was Top Ender who was looking forward to this updated version of a play and had even gone online to research it a little as she knew nothing about it and was excited to see how a play was shown in three Acts. 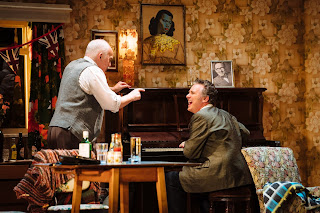 Archie Rice is a comedian, and his act/the whole showman at the theatre is quickly becoming a relic of a previous era, but he doesn't believe that, or rather he doesn't want to believe that, he'd rather think it was the audience's fault for his downward spiral as he knows if he can just come up with the next thing, then he'd be fine and just like his Father, he'd be a success.

Archie is nice on the surface, but as we see him at home and see how he treats his family and come to realise what he really thinks of the audience, we see that he's actually dead behind the eyes and a bit of a bastard to be honest!
The original setting of the play was the 1950's with the Suez canal crisis as the background, this update is set in 1982 with the Falklands War and all that happened with Margaret Thatcher's government and despite knowing it was the 80's, it looking like the 80's (didn't everyone know at least one person that had the Chinese Girl Painting by Vladimir Tretchikoff print on the living room wall?!), the same rubbish was being spoken about immigrants and the colour of peoples skin and even sexuality.

It's quite the social commentary. 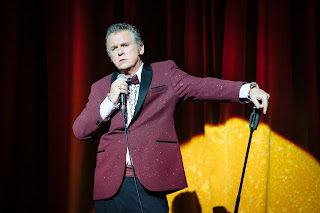 Maybe in a forty years or so there will be another version, where it is set during this wonderful period of Brexit and Top Ender will identify with Archie and possibly a change in her life.

The show was brilliant, all the cast were amazing and if you are around this week then ensure you get to Milton Keynes Theatre to see it.

Thanks for the tickets and the drinks MK Theatre, they were much appreciated!
Date Night Family Life Paid Day Out Theatre