Called Out At Church

- September 01, 2019
Before I start this post, I need to tell you a little about one of my closest friends. She is also a member of The Church of Jesus Christ of Latter-day Saints, is in my ward and is also one of my counsellors in the Young Women's presidency. Our friendship is the sort of friendship where everything is on the table. She can tell me to my face if I'm being an idiot or overthinking things and I can tell her the same. I can tell her about any issues I'm having with my children or ask her the most stupid of things and she doesn't judge and she can do the same, although without the stupid questions as she's rather smart.

I seriously love this woman so much.

Whilst they had been discussing some of them, a quote had been shared and the Young Women were busy writing down this quote, and so whilst they were doing that I had been asked to read out the snippets of the talk so they could do two things at once. Some of our Young Women are so talented, that one of the young women created this graphic in her notebook for the quote. It is so beautiful, but I'm not surprised as she is very talented. 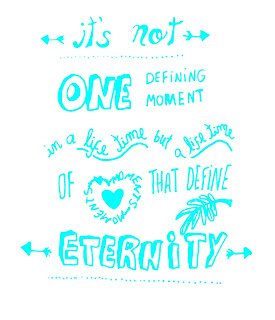 Anyway. The snippets of the talk were randomly placed in a pile on the table and the first snippet I picked up was obviously meant for me. It pierced my heart to the point that I had to share it on Facebook, which is ironic given the subject of the snippet. 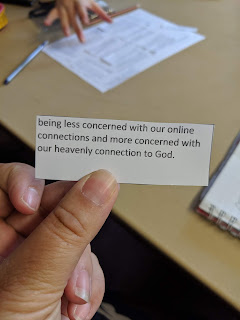 I was being called out in the young women's class.

Now obviously, this wasn't really aimed at me. It was part of the talk and to be honest, it was something that I had thought about myself a good many times before, which is why it seemed to jump out at me. If part of the talk had been about clearing out the junk in your life, I would have felt called out, if it had been about reading our scriptures instead of watching Netflix, I would have felt called out.

My friend has a habit of hitting me exactly where I need to be hit when she is teaching. It's almost like she aims her lessons directly at me!

It got me thinking more though. It got me thinking about how I want to connect with my Heavenly Father more, how I want to make sure that I put as much effort into the relationship I have with him as I do into making my friends laugh online. As I do with writing blog posts or putting pictures on Instagram or chatting on Twitter.

I guess that was the point of the lesson, however, to get all those taking part to think about how we can improve ourselves and our relationship with God. How we can be in this world but not of it. I'm glad that my friend is in tune with the spirit and knows what she should be teaching so that I can be refined.
Family Life Life Lessons Religion