- September 05, 2019
When Top Ender, Dan Jon and I were having our meal out last week the server had asked if we wanted a couple of children's menus, which I declined. Top Ender at nearly 16 is most certainly old enough to have a grown-up menu and Dan Jon at 11 could probably eat a small horse by himself if he wanted.

As we were talking during the meal, Dan Jon started to explain a thought he had had to Top Ender and I, that was amusing him.

He started by looking at me in the eye and claiming; 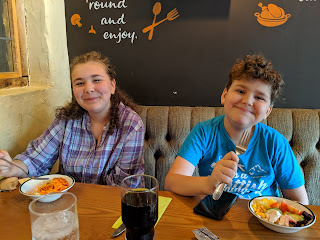 I jokingly advised him to stop talking right there and then and think very carefully about what was next coming out of his mouth. A twinkle appeared in his eye and I knew, I knew that I was about to be insulted so I warned Dan Jon with not only an eyebrow raise but asking him to stop for a moment, to take a bite of his burger and to enjoy it whilst I took a picture, because this may be his last meal and the last photo I ever had of him as I might be about to murder him! 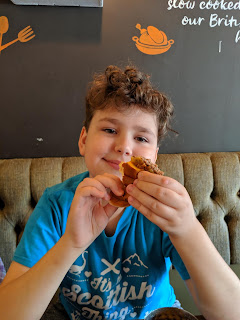 Dan Jon grinned and carried on.

"Like, I said, when I'm old like you, like when I'm 70 and I can go to a restaurant and the lady who seats me asks if I want a grown-up menu and I can say What do you mean? I'm only 7 and my Mummy sent me to get a menu for me! And she'll be all confused and I'll laugh"

Now, I'm not sure if Dan Jon thinks I'm 70, or if at 40 I'm really old, or if 11-year-old Dan Jon is just great at insulting me in a way that has me questioning what he actually means!
Family Life Funny