- September 19, 2019
Every so often, there is a need to go shopping in the middle of the night. It might be that Dan Jon and I have decided we need a snack when Top Ender and Flyforu are away. It might be that Flyfour has a sudden urge to make something and so runs off to buy whatever ingredients he needs. It might be that Top Ender remembers the night before her English lesson that she is supposed to be taking in biscuits for her class to share. It might be that we've run out of something we need for the morning or something important, like cat food, or really important like chocolate.

Occasionally when Top Ender and I are out at the Theatre, we'll make a stop at Tesco on the way home and when Dan Jon and I went last week, I asked if he'd mind going with me, despite it being way past his bedtime, to pick up a couple of things.

Dan Jon, of course, agreed. Like most 11-year-old boys, Dan Jon enjoys staying up past his bedtime even if it is just to go to Tesco to pick up some washing powder and whatever else his Mum realised she was needing.

As we walked through the store, dodging the night staff who were busy filling the shelves, we chatted and picked the things we needed, and a few things we might not have strictly needed but things that we wanted! 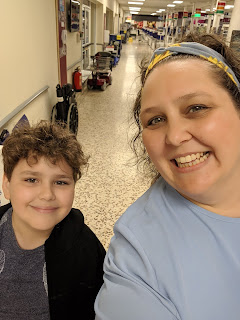 It was fun to be together, it was fun to be out so late and we're going to do it again in the not so distant future, even if it is only to pick up some fruit or things for breakfast!
Date Night Family Life