- September 15, 2019
During Mutual a few months ago, one of the boys, threw a ball to me. Actually, that isn't quite true, he didn't throw it to me, he threw it at me, by lobbing it in the direction of my head. The expectation was clear, he was acting the fool and was hoping to amuse his fellow Young Men, and maybe impress a few of the Young Women at my expense. Knowing this young man as well as I do, I could tell that he had envisioned the ball sailing over my head or perhaps even better in his mind, hitting me in the head and for my embarrassment or shock to add to his comedic timing of having thrown the ball whilst I was getting everyone's attention and asking all to settle down.

He isn't a bad kid. He made a decision in the heat of a moment and it was the wrong one.

His plan to humiliate me failed, because of one tiny detail that he forgot to factor into his plan, mainly because he didn't know me as well as he thought he did. He didn't know that I used to play Netball and still have pretty good hand, eye coordination, even for an overweight forty-year-old! 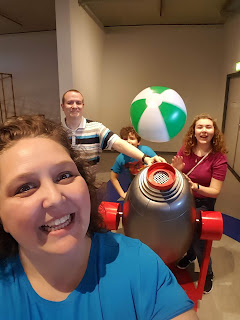 I think it must be like riding a bike, despite it being at least 20 years since I played as I easily caught the ball, whilst still getting the attention of the group and all whilst not looking directly at the young man in question or the ball as it flew towards me.

I was prompted to think about it when closing up the Chapel with the other leaders one evening after a Youth activity recently. Some of the Young Men had been playing basketball, and I did my usual trick of telling them it was time to go and that I was turning the lights off in five, four, three, two... one as I slowly flick the ten switches to turn the lights off.

One of the young men was determined to make a hoop before I fully turned the lights off. The young man pounded the ball down the Gym, the lights turning off behind him as he passed through sections of the court, before jumping and throwing the ball towards the basketball hoop... and missed, with the ball rebounding in my direction.

Instinct took over and I grabbed the bouncing ball and walking towards the door, in the dark seeming like it was slow motion, I threw the ball over my shoulder towards the basketball hoop on the wall. I shan't tell you if the young men who stood watching from the doorway, looked at me with eyes of disbelief as I walked towards them or not. I shan't tell you if the ball went in or not because what was important wasn't the shot being made or missed.

We try to fix the mistakes.

We try to fix our flaws.

We keep going, even as the dark closes in around us, because we know what our goal is.

What's important however, is that we keep going. We accept our mistakes, and try to fix them. We try again, or we practice until we get it right.
Family Life Religion