- September 10, 2019
Many years ago, I used to babysit for what seemed like the entire town I grew up in. Seriously, I babysat almost every night, sometimes even babysitting for multiple homes in one night. And I loved it. Those young children that I looked after for a few hours, whilst their parents were out were like my little brothers and sisters, in fact, three of them were my bridesmaids because they meant so much to me and my family.

Recently, one of the little girls I used to babysit for has moved near to where I live now. Of course, she is all grown up, married and has several young children of her own, but it is great to see her every so often out and about in the community and at Church and just being the fabulous woman that she is.

It's made me a little nostalgic however, I mean look how cute I was! 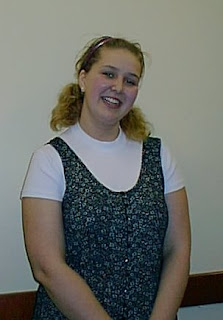 Last Saturday night something quite surreal happened. You see, that night, I took Top Ender to this now grown-up woman's home so Tops could babysit her children, for a couple of hours. It was so weird, but so lovely too, almost like a history repeating itself moment.

After the Mum and Dad had left, Tops sent me a quick message just letting me know that all was well and that she'd already been paid.

"How do they know I'm not going to throw a rager?!" she questioned.
"Well, that's easy! They know you have no friends as you were free to babysit on a Saturday night!" I replied in a loving and supportive totally amusing to me only way.

I guessed from the radio silence after this that Tops wasn't as amused as I was by the answer I'd given, but when she got home she did raise an eyebrow and tell me I was hilarious, so maybe it was a joke that took time to grow on her!

Oh and I think it's also important, that I had to explain to Flyfour what a rager was. I guess that I'm more down with the kids than I thought!
Family Life Funny