Banned For a Year!

- September 18, 2019
I went to give blood last week. It's something that I've been doing since going to University and is actually really important to me and has been since I started giving blood for two, well three reasons.

The first is, as many of you know I have a blood phobia, to the point where I often pass out if I see blood. Giving blood is my way of not letting that control me, and yes I may close my eyes and distract myself every time and have to warn the lovely team that help take my blood, but it's my way of having control over my phobia. 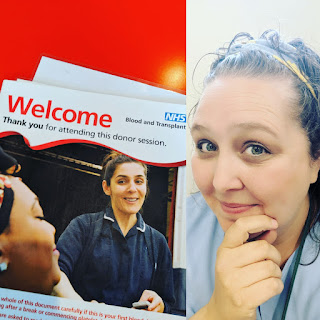 The second is that I made it a point to give blood because my Mum was (still is) a Type 1 Diabetic and as such isn't allowed to give blood. However, like a lot of the population, she has needed to have blood transfusion ins the past and I was doing it to sort of pay back the NHS for having taken care of my Mum.

The third reason is Dan Jon. After Dan Jon was diagnosed, as being a Type 1 Diabetic, I wanted to give blood for him, because again the NHS looks after him. Seriously, the NHS is the reason my son is alive, if it wasn't for them I wouldn't have him.

As they tested my blood, before I gave my blood donation, we were chatting about various things happening in my life and I didn't even notice when the lady needed to take another sample. I did, however, register the change in her voice.

There was a problem and the Nurse was needing to come in and speak with me. 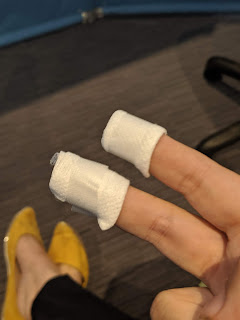 My blood iron level was too low and I would not be donating blood today. In fact, my iron level was so low that I was banned for a year from giving blood and had to book an appointment to go and see my GP to get my haemoglobin tested and needed to have proof my iron level was normal before I was allowed to donate again.

I'll let you know more as soon as I know it!
Diabetes Family Life Service