- September 20, 2019
Our local Tesco store has been doing some refurbishment works over the last few weeks in their car park. We don't actually go to Tesco that much so we didn't really know about it until one day when I stopped off to get a key cut and saw they were taking away the trees between spaces. Normally, I'd be very unhappy about them taking trees out, but these trees were slowly being murdered by being in the car park, with not enough space to grow properly and fairly often being hit by drivers who should be looking a lot more carefully where they are driving! 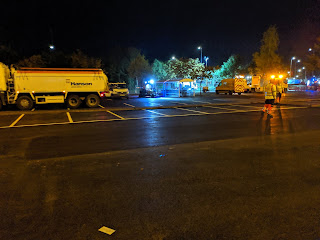 Despite not having been to Tesco for what feels like months, in the last week we seem to have needed to visit the store, what feels like daily. So we've been able to watch as the works take shape and see how it is going to benefit the still loyal Tesco shoppers and even the occasional visitor like me.

All was well, until Dan Jon and I went late night shopping, as it was then that we realised that they had STOLEN MY FAVOURITE PARKING SPACE!

Along the walkway, prior to our late night shopping trip, there were several larger handi-capable parking spaces, with some small regular spaces next to them. My favourite was the one that was next to the handi-capable spaces, it had a plastic bollard rather than a metal one and meant that I was able to easily get out of my car.

AND NOW IT WAS MISSING!

A couple of days later and I visited the store, and my favourite space was gone and instead it was replaced with a regular space. 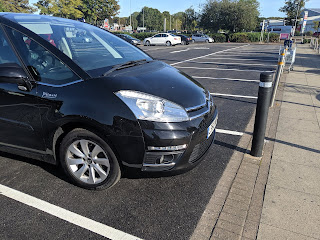 I know it isn't this new spaces fault, but it will never be my favourite, even if I did park in it out of habit this week. No, I will simply have to search for my new favourite space in the car park over the next week or two and forever remember my favourite space how it would want to be remembered.
Family Life