- September 11, 2019
We had two tickets to go and see Avenue Q thanks to Milton Keynes Theatre and Top Ender agreed that as she went not that long ago with Flyfour, in Northampton as a Daddy Daughter treat, that it was time for Dan Jon Jr to go and see it and to finally understand some of the quotes that our family seem to have ingrained into our consciousness, as Flyfour and I originally saw the show a good eight years ago and immediately added some words and phrases to our vocabulary. 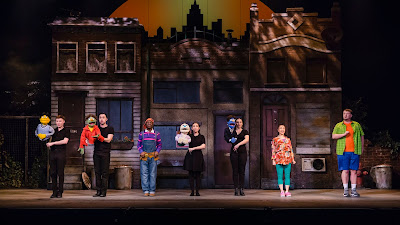 However, I've never been one to be accused of being sensible, so off we went. Even saying to the lovely lady at the Theatre who said the show had an advisable age of 14, that we had discussed this as a family and having seen the show a few times before, I was happy to be taking Dan Jon to see the show.

To be honest, before we went Dan Jon didn't really seem to want to go. However, the boy is like me and likes a night out and by the time the interval rolled around Dan Jon looked at me with the grin only an eleven-year-old boy who was truly in love with a show could manage. Having known a little about the musical, he thought he was fully prepared for watching it, but he wasn't and he also hadn't been ready for Trekkie (one of the Puppets) to point right at me and tell Kate Monster that I was a normal person and watch porn... 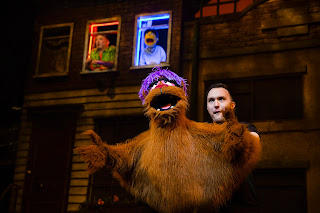 Dan Jon was wetting himself at that, but not as much as the woman sitting just in front of us and to the left, who turned around to look at me, because Trekkie was still pointing at me and as there was nobody sitting either in front of me or behind me it seemed like I was part of the show.

We spent the entire performance in hysterics, along with the rest of the audience and at times the cast. We tried very hard not to sing along (it's impossible if you know the words, as we do) and one of Dan Jon's new Drama teachers is very excited to have a chat with him about what he thought about the show (it's one of her favourite musicals) and has already said she and I will have to sit together to talk about all our favourite shows, what we've seen and what we're planning on seeing in the next few months. 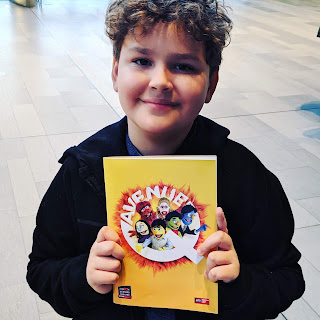 If you have teenagers and if you can get to Milton Keynes Theatre this week to see the show. It is at Milton Keynes until the 14th September and is honestly well worth the effort and your teens will love you for it.

We were gifted two tickets and two drinks, which of course we had two J2O's (because they are our favourite) in exchange for this review, but even if I hadn't have been given tickets I would have gone to see this show because we love it so much and... well we've actually got tickets for Top Ender to go later this week so Ssssh!
Date Night Family Life Paid Day Out Review Theatre