- December 10, 2012
Last week I forgot to post pictures of the Children's lunches, mostly because I was running around like a headless Chicken for most of the week trying to get a lot of last minute jobs done, like clean my house, do the dishes, stop slobbing on the sofa.

So I thought I would do a quick round up here for those of you who are interested!

The first lunch we have here is a Christmas gift all neatly wrapped up. As you can see in the top left there is a penguin on the Satsuma, this was a temporary tattoo which thanks to Pinterest I found out works really well on fruit with a skin you aren't going to eat. 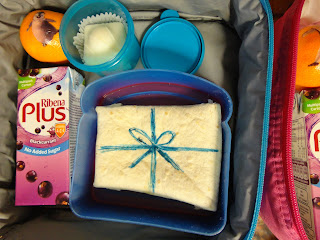 We were sent a new Seasonal packet of Pom Bear Crisps (available in Asda), they are Pigs in Blanket flavour and for the first time they aren't Pom Bear shaped! They are adorable Snowmen. We love them as they are Gluten Free so Daddy can eat them too! 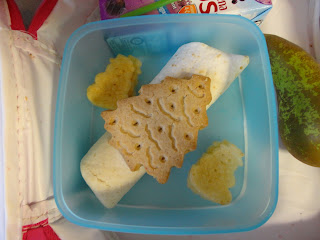 The Christmas Tree Shortbread there is also a Gluten free treat, and has had Big Boy cracking up with delight because not only are they not short they aren't made of bread either... I really don't know where this boy gets his sense of humour from!

Another lunch we had this week were Pitta Bread Snow men with ham scarves. I used my food colouring pens to draw the different features on the pita breads and that's a small Fabulous Bakin Boys Mini Choccy Muffins as a hat too. 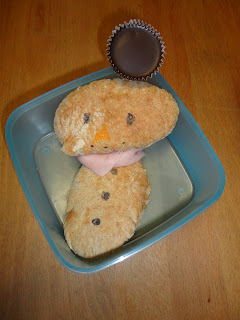 I love the mini versions that the Fabulous Bakin' Boys make because it gives Diabetic Big Boy a treat in his lunch box that isn't sky high in carbs and sugar and also Tops loves them because she can eat two instead of one!

So for the rest of December keep an eye out on the A Mothers Ramblings Facebook page as I will be posting the pictures (I'm organised and I've done the dishes!) every morning and the challenge is to make Christmas themed lunches for the whole of December!

We were sent the Pom Bear Snacks to review. I almost ate them all, but remembered that would be greedy.