- December 10, 2012
Every so often I surprise Top Ender by being "Fashionable", or by knowing something that she is sure that I am far too old and uncool to know. Like what Ugg boots are.

It's not that hard, here in Milton Keynes it's a fairly common sight to see girls wearing Ugg boots, skinny jeans and long jumpers so I've learnt how to tell real Uggs from fake Uggs at about 100 paces. It isn't hard, The real Uggs are great quality and look expensive where as the fake ones... well they look fake.

Tops was asked if she'd like a pair of Uggs, and she chose the Kids Cardy 2 in black, which she said would be great as the colourful buttons down the side would mean she could team it would some bright clothes or with dark clothes because they are black. 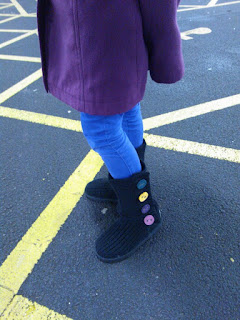 As soon as the Uggs arrived Top Ender put them on. She was delighted to find that they were as warm as she had hoped, with a snug sheepskin footbed not only keeping her warm but keeping her feet comfortable too.

Top Ender wore them to School on a non uniform day, and found that several of her classmates had other Ugg boots so she fitted in perfectly and she and her friends apparently compared the different boots and decided that she had the best ones! She was a rather happy bunny after that. 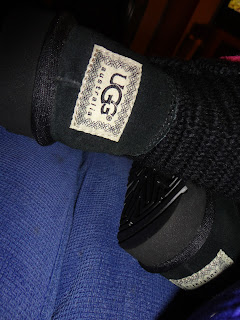 Tops wore her boots to Church and to see Auntie Kitty and loved hearing people be surprised that she had a pair of genuine Uggs on when they saw the labels on the back of her heels. She was so delighted to have a pair of designer boots.

Daddy and I have had a good examine of the boots, and the only negative that Daddy could come up with was they weren't suitable for going out in wet weather. Top Ender soon explained to her Daddy that these aren't boots for puddle jumping but to make her outfit complete and what little girl doesn't want to perfectly complete her outfit?!

We were sent a pair of Uggs boots for this review.